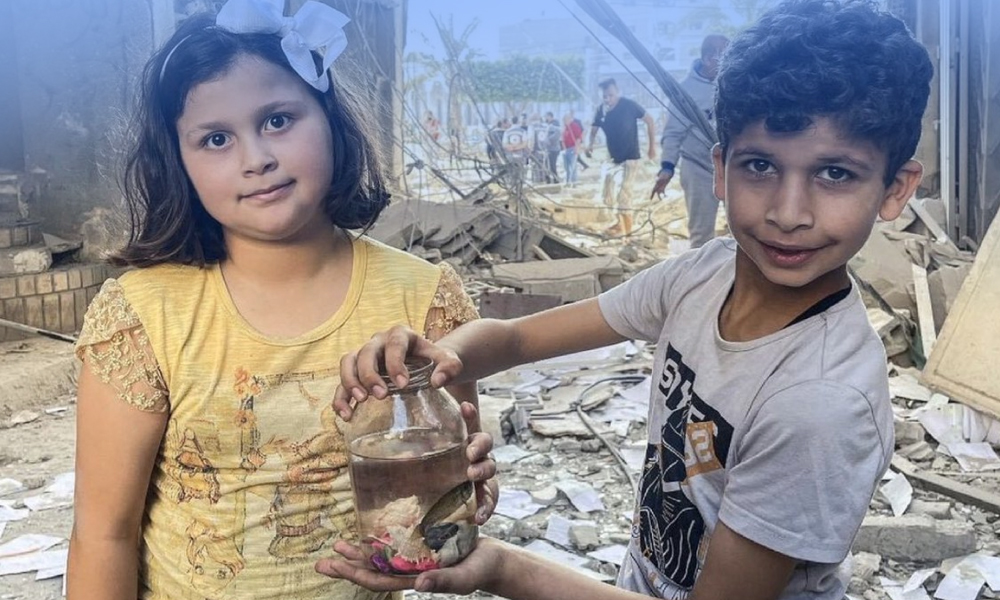 Photo Caption: Gazan children Nariman and Mahmoud after saving their pet goldfish from the rubble of destruction

I flung the pillow with a force that could have toppled my wooden cupboard. And regretted it in the same moment. Embarrassed yet again by a feeling of how pathetic I must have appeared, my hair not in place, my face red in colour and my voice sharp, hoarse and loud.

It was unusual for my kids to disobey, throw tantrums, pick up fights or not be bothered by my anger. The frequency of such defiance made me wonder if I was losing control. I sobbed when my heart asked me if I was loving less. My doubts were confirmed when I found my children sulking as well. A tight hug reassured them, and I was sorry for having chided them when all they wanted was to cling to me. They too were wrestling with anxiety, just like me.

The socially isolated COVID world
The Covid scare has unsettled kids globally like never before. According to the WHO, one in seven kids are at risk of mental health complications due to the pandemic. It has become commonplace to find chatterboxes staring into empty spaces and happy-go-lucky faces making an effort to giggle and chuckle. Of the many life lessons imparted by the lockdown, one major lesson is that the school playground and canteen conversations are invaluable assets. The chaos and fights intrinsic to schools are stress busters. Friends and peer groups are an invisible part of their anatomy.

Social isolation, therefore, seems to have pushed even younger children into the adolescent mode. Every new variant of the virus brings in a wave of uncertainty, challenging the basic feelings of security and safety, leaving children more vulnerable than ever. Parents’ loss of jobs or pay, the never-ending news of rising fatalities, shortage of oxygen and medication etc. ensure that tensions run high within homes. The disruption of the school and play routine has created a vacuum that kids are not equipped to handle. Queues at crematoriums and graveyards can cause psychological distress to adults and children alike when seen on media.

From nostalgia to reality
To diffuse the situation and create a positive atmosphere, I opened up old family albums. Beautiful memories of growing up soothed our irritability to some extent. Chubby faces smudged with cerelac and Dairy Milk, first day at school photos, consolation prize in the sack race…. The pre-COVID world appeared carefree and almost dream-like. What strangely caught my attention was the perfect background in all the pictures. The choice of studio with the best scenery, my neighbour’s garden or the right spot in my drawing room. My mind threw open another window allowing an influx of concerns to weigh heavy on my heart. Aren’t beautiful locales a privilege too, I asked myself, as my thoughts, like wandering clouds drifted to the children of Gaza (they constitute 46% of their population) who pose with a victory sign against the backdrop of bombarded buildings and makeshift hospitals.

The lost childhoods of Gaza
How does it feel to be woken up not to the school alarm bell but to the noisy splintering of glass panes? To be found not under a bed as part of fun and games but in order to avoid mountains of debris? To sip not from a bottle of mineral water but to inhale toxic dust all the time. (95% of the water in Gaza is unfit for consumption). If lockdown can make us anxious in the four walls of an air-conditioned house, what is the notion of tragedy where the only predictable event is an untimely death? Mothers might never return from grocery stores, fathers can be picked up in the middle of the night for torture, kids might get arrested on their way to schools, and one may return home to find one’s house gone – or taken over by settlers.

For a moment, fussing over household chores seemed so insensitive. Why should the world end when the domestic help doesn’t turn up for work? Not having visited the ice cream parlour was no big deal. From the corner of my eye, I could picture my angst mocking at me and challenging me to at least take baby steps in a world torn by strife.

My children were visibly moved when I juxtaposed their childhood pictures with those of the children of Gaza. A promise left their lips of not getting desperate to spend another week without ordering pizza. Scenes from classrooms with bullet holes in the walls made them grateful for their online classes. If getting restricted to a chair for a couple of hours under the prying eyes of the camera was tantamount to confinement, what about kids as young as eight who in the absence of a lawyer and their parents are subjected to the same arrest, trial and interrogation procedures as adults on the mere suspicion of throwing a stone? Almost 500-700 children are persecuted every year. Ill-treatment in this system remains “widespread, systematic, and institutionalised throughout the process”, according to a UNICEF report. My children who hung on to every word I said, nodded in agreement and looked sober. How traumatic solitary confinement must be for a child who is also forced to sign confessions often in Hebrew, a language he or she doesn’t understand.

I am not burdening kids with more sadness. I intend not to frustrate but to upskill them to brave the odds and carve new pathways. Fear cannot be sent away; it can be tackled. Buckling under pressure or facing it head-on is the choice we have to make. Isn’t the butterfly’s struggle to break out of its cocoon required to strengthen its wings? The life cycle of a butterfly is one chapter of biology class that has stayed with me and seen me through many crises. Any temptation, even out of mercy and love, to cut open the cocoon for the butterfly’s easy flight actually kills it. Without the struggle….it can never ever fly!

I felt vindicated and touched when my children wanted to know if joining the Red Cross as doctors can allow them to help children affected by war. It was a moment of growth, of learning for all of us at home.