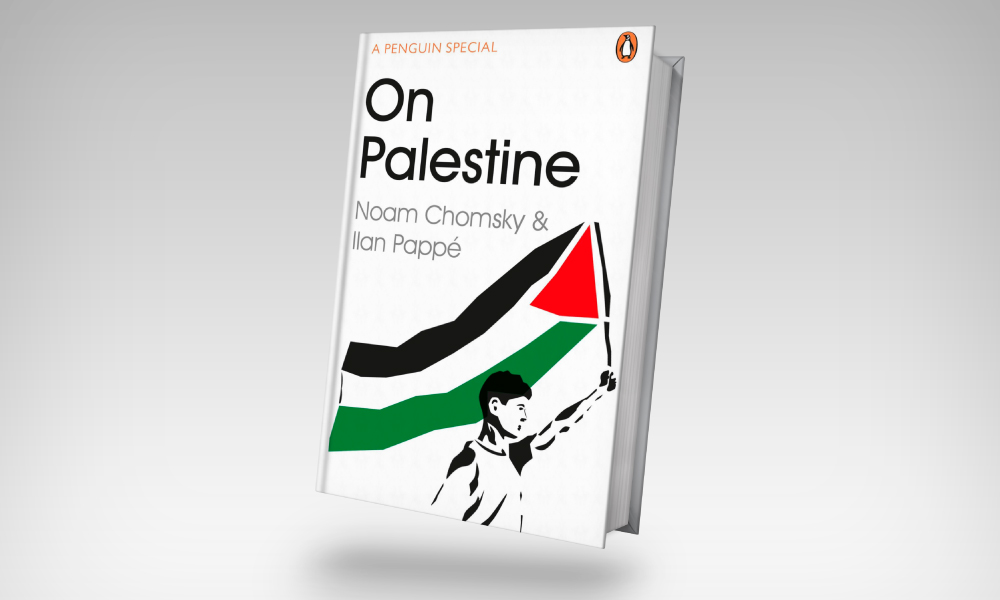 “Finding a solution to this question could then open
the door to a new vision, to a new world, to new
possibilities for all of us.”

On Palestine is a book that provides a vital overview on the various contentious debates related to the Palestine issue. The authors discuss the evolution of narratives surrounding the Palestine issue, deconstruct and critically review various related concepts that are otherwise considered fait accompli, comment on the evolution of Israeli occupation, Western complicity and the solidarity movement, and the changes in public opinion throughout the years. Most importantly, they offer practical roadmaps for the future of the Palestine cause by giving a fresh approach, which seeks to achieve tangible change.

The book is a combination of conversations and essays between renowned American scholar and intellectual Noam Chomsky, Israeli historian and activist Ilan Pappe, and French activist and author Frank Barat.

In the first chapter titled The Old and New Conversations, author Ilan Pappe discusses the paradoxes faced by the global activist movement for Palestine. He analyses why even though global popular opinion may be changing in favour of Palestine, the hegemonic power structures that sustain Israel remain in place and the ground reality of Palestinians has worsened. He then offers a radical critique of the peace process between Israel, Palestine and relevant stakeholders, which he terms as “the peace orthodoxy” and dissects the reasons for its failures.

He reminds us of the importance of language and knowledge production and how it is weaponized by the powers to spread their agenda. He highlights the importance of using accurate terminologies. For example, it would be highly inaccurate for anyone to describe the Palestine issue as a “conflict between two parties” when evidence clearly shows that it is rather a case of Israel being a settler-colonialist and apartheid state engaging in multiple violations of international laws and carrying out systematic ethnic cleansing of the Palestinian people.

Chapters two through six are a set of conversations between the three intellectuals. They first discuss the evolution of the Zionist movement and Zionist ideology and critically interrogate the ideas propagated by the state of Israel. Coming to the present, they discuss Israeli Jewish society and the current situation of the Israeli state and its destructive policies. They draw a parallel between apartheid South Africa and Israel occupied Palestine and critically examine the similarities and differences.

They also offer eye-opening constructive criticism of the pro-Palestine activist movement by pointing out those aspects of the movement which end up harming the cause and offer solutions for the same. For them, effective pro-Palestine activism should have two core objectives: 1) directly impacting the unjust Israeli state policies and 2) educating and clearly explaining to common people about the true nature of Israel and the purposes of the Palestine solidarity movement.

For instance, during the Vietnam War, some activists had indulged in destructive behaviour. This action did not change the American policies with respect to Vietnam, rather they increased the on-ground repression against Vietnamese civilians. Thus, activists should adopt the course of action that seeks to affect tangible change rather than simply creating a hue and cry. After this they imagine possibilities for internal reform within Israeli society. A significant portion of their conversation is spent on discussing the political solution to the occupation.

They highlight the drawbacks of the two-state solution while also acknowledging its nuances and similarly, they discuss the one-state solution as an effective alternate political solution but here again, they acknowledge the complexities involved. They discuss the right of return of the Palestinian refugees and remind us that this should be a focal point of the solidarity movement.
The other half of the book is a compilation of essays by Noam Chomsky and Ilan Pappe.

Chomsky reiterates that Israel would not be able to continue its occupation were it not for the sustained support from the United States and therefore he calls for a plan of action that puts pressure on the US from civil society to abandon its pro-Israel policies.

Both Pappe and Chomsky deal with the oft-repeated counter-questions posed to pro-Palestine activists such as “What about Hamas?”, “Israel has right to defend itself” as well as prevalent myths such as “Israel is the most moral army” or that it is the only democracy in the Middle East.

They explain the history of the inhuman siege of Gaza strip and Israel’s history of following racist and apartheid policies with its own Palestinian citizens as well as its violation of international laws with regards to the Palestinians in the Occupied territories. Because of this, Gaza has become the world’s largest open-air prison with alarming rates of malnutrition in children and dire lack of basic amenities such as drinking water to give only a few instances. Pappe terms it as an “incremental genocide” against the Palestinian people.

Chomsky explains the reality of the situation inside the Gaza Strip and the truth about Hamas. He explains its origin as a democratically elected entity that by Israel’s own admission has followed the terms of all ceasefire agreements whereas Israel has never done so. He calls out the international community for their complicity and reminds them of their hypocrisy.

As Indians in solidarity with Palestine, this book challenges many of our own preconceived notions about this issue and equips us with the knowledge and understanding necessary to enhance our activism.

Many of the characteristics of the Israeli state have chilling parallels with the nature of the current government in India and thus, the insights of the authors serve as a useful roadmap for navigating our own struggle against the processes of ethnic cleansing and majoritarianism.

Many of the observations on activism and solidarity are significant not just for the Palestinian cause, but for all marginalized groups across the world.

Frank Barat says in the introduction, “Exploring the Palestine case is therefore crucial for understanding where we stand as human beings and what we stand for. Finding a solution to this question could then open the door to a new vision, to a new world, to new possibilities for all of us.” This book ought to be mandatory reading for all those who consider themselves to be active supporters of the Palestinian cause.