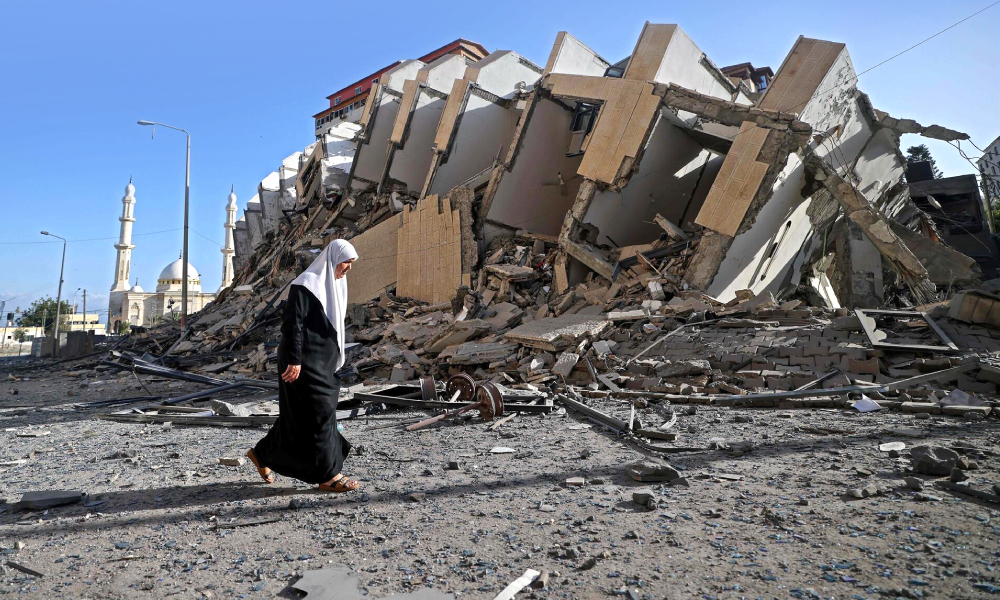 Category : THE WORLD OF POLITICS
Author : Abul Ala Sayyed Subhani Translated from Urdu by Nadeem Ali

At a time when most of the countries in the Muslim world, by their actions, have proven beyond doubt that they are going through the worst period of slavery, Gaza with its iron will and unprecedented steadfastness, has declared that it is free. It is not only free, but it has become a symbol of the struggle for freedom for Palestine and the entire Ummah (community of believers).
At a time when a large part of the Muslim world has distanced itself from the struggle for the restoration of Al-Aqsa Mosque and the liberation of Palestine, Gaza not only announced, but also practically showed that it is not going to ever barter or negotiate Al-Aqsa.
At a time when the entire Islamic world is being ruled by the United States and Israel with their weapons, Gaza proved that there is a force greater than these weapons – the power of faith and belief, the power against which no earthly power can sustain.

At a time when the entire Islamic world is engulfed in internal chaos and dangerous external conflicts and tribulations, Gaza has become a battlefield, and with full unity and solidarity, with elders, women, and children sacrificing their lives for the protection of the community of believers and the restoration of the first qibla.

Gaza is the only city in the world to have sheltered so many great kingdoms and been the home to so many Prophets in such a small area. It has settled 44 major cities in (occupied) Palestine. Hence one will find the cities of Khuza’ah, Beit Lahiya, and other towns such as Beit Hanoun, Bani Suhaila, Ibsan and Jabalia. Every neighbourhood in the city recalls the broken promises of independence and the lost history, now suffocated by the Zionist project and the many settlers.

Gaza is supposed to be one of the most densely populated towns in the world. The conditions in the refugee camp areas are deteriorating further, with a population of 55,000/sq km. It wouldn’t be wrong to say that the population of the Gaza Strip is the largest concentrated population in the world suffering from consistent unemployment and starvation.

Gaza has been occupied at the hands of British colonialism since World War I. It came under Egyptian rule after the 1948 Arab-Israeli War, and remained under Egyptian rule till 1956. Then it was occupied by Israel in the 1956 war, and they ruled for about five months. After the evacuation of the Israeli army in 1957, it again came under Egyptian rule. In the 1967 war, Israelis again took over this piece of land and this unlawful occupancy continued even after the Oslo Accords. The main objective of the 1993 Oslo Accords was to establish a formal government in the Palestinian Territories within five years. This includes the Gaza Strip and the West Bank in particular. Israel paid no heed to this accord. After the Second Intifada, Israel was forced to move out in 2005, and then general elections were announced in Palestine in 2006. Hamas also took part in the election, and registered their victory by an overwhelming majority. Hamas’s victory was neither acknowledged by the Palestinian Authority, nor by Israel or the Western powers. As a result, in 2007 the Palestinian Authority, which occupies the West Bank, and is represented by Mahmood Abbas, began fighting with Hamas over the issue of governance. Hamas managed to quell the internal strife. After the loss of nearly hundreds of lives in June 2007, Hamas succeeded in suppressing this internal conflict and established its own government in the Gaza Strip.

The “Israel-Palestine issue” became the “Israel-Gaza issue” since Hamas established their government in Gaza. The Government in the West Bank not only withdrew from the resistance and stood by the side of Israel, but had adopted the policy of negotiating for solutions with the occupier. Israel took this opportunity to firmly re-settle in the area, but could not find any footing in the Strip. The Hamas government’s promise to fight for liberation rather than to negotiate for partial solutions has made it difficult for Israel to exercise significant control over Gaza despite settler-colonial methods. As a result Israel took strong offensive military actions against Gaza towards the end of 2008, but could not gain victory. After the Arab Spring and the ascendance of Muhammad Morsi in Egypt, the relationship between Gaza and the Egyptian government too became stronger. Hisham Qandil, Morsi’s Prime Minister, visited Gaza and President Morsi, after meeting with Khaled Meshaal and Ismail Haniyeh, announced solidarity with Gaza and all possible cooperation. Frightened by all these changing circumstances, Israel again attacked Gaza in November 2012. This war was much shorter than the previous ones and a ceasefire agreement was signed between Israel and Hamas, negotiated by Egypt. But taking advantage of the deteriorating situation in Egypt, Israel once again attacked Gaza on July 8, 2014. However, while the Israeli aggression of 2014 was a test of patience for the people of Gaza, it proved to be extremely embarrassing for Israel and the Muslim and the Western world. On this occasion, the people of Gaza fought against the conspiracies of Israel, as well as regional and global powers with the same iron-willed determination. The recent violent attacks on Sheikh Jarrah and other Palestinian villages was met by a spirited resistance by Palestinians as well as the Hamas resistance, leading to a ceasefire yet again.

Gaza is not only engulfed with Israeli aggressions and conflicts but also surrounded with various other hurdles and obstacles which are summarized below:
1) Hamas, the ruling political party, has been accused of terrorism by the world powers and even some Muslim countries. This has created a lot of problems for Hamas at the political level.
2) A bigger challenge is the growing relationship between the Fatah party and Israel, and the conflicts between Hamas and Fatah. Whenever Hamas seeks to have reconciliation with the Fatah party in order to step towards a strong democratic government in Palestine, Israel makes every effort to scuttle the process through Mahmoud Abbas.
3) One of the biggest challenges is the blockade of Gaza, both by neighbouring Egypt and by Israel, which has turned Gaza into no less than an open prison. This blockade seems to be a major obstacle to its relations with other countries and it is also proving to be a major obstacle in the way of its citizens to take advantage of the various political, economic, educational and other opportunities available globally.
4) As a result of this blockade, Gaza is facing acute problems of economic downfall. There are several problems that are ruining the economic structure of this land. Salary issues of government employees, decreasing number of indigenous industries, the problem of rising unemployment, the problem of the falling economy and industrialization, etc. are some of those major issues. On the other hand there is a serious issue of rehabilitation after the devastation caused by the Israeli aggressions. Everywhere there are piles of debris and rubble, but reconstruction is near impossible.
5) Due to this blockade, it has become difficult to bring life back to normalcy for the inhabitants of Gaza. Israel has cut off its basic needs, like electricity and water. They hardly get basic medical facilities.

These are only some of the problems faced by the people of Gaza. The courage shown by these people is beyond description. Even under these impossible circumstances, the inhabitants of Gaza wish to work to determine their own future and be their own decision makers. Despite all these problems and compulsions, Gaza has achieved significant success. At present, the literacy rate in Gaza is more than 90%, and there are several big universities, the most prominent of them being the Jamia Islamia of Gaza, which was founded by Sheikh Ahmed Yassin Shaheed. There are also several other renowned universities like Jamia Azhar Gaza (based on Egypt’s Jamia Azhar) Jamia-al-Aqsa, Jamia Filistin, Jamia-tul-Umma, Jamia-tul-Quds Maftooha (Open University).

To conclude, there are various discussions about the name of ‘Gaza’. Some people think that ‘Gaza’ is synonymous with the Arabic words (‘المنعۃ‘شوکت) (al-man’a) meaning pride or glory, (‘القوۃ‘قوت) (al-qawwa) meaning power and strength. Some people take it as ‘الثروۃ’ meaning wealth. While some other people think that it is الممیزۃ’ ، المختصة’(meaning distinguished or unique). Meanings may differ, but the fact is that “Gaza” has a distinctive meaning of its own.