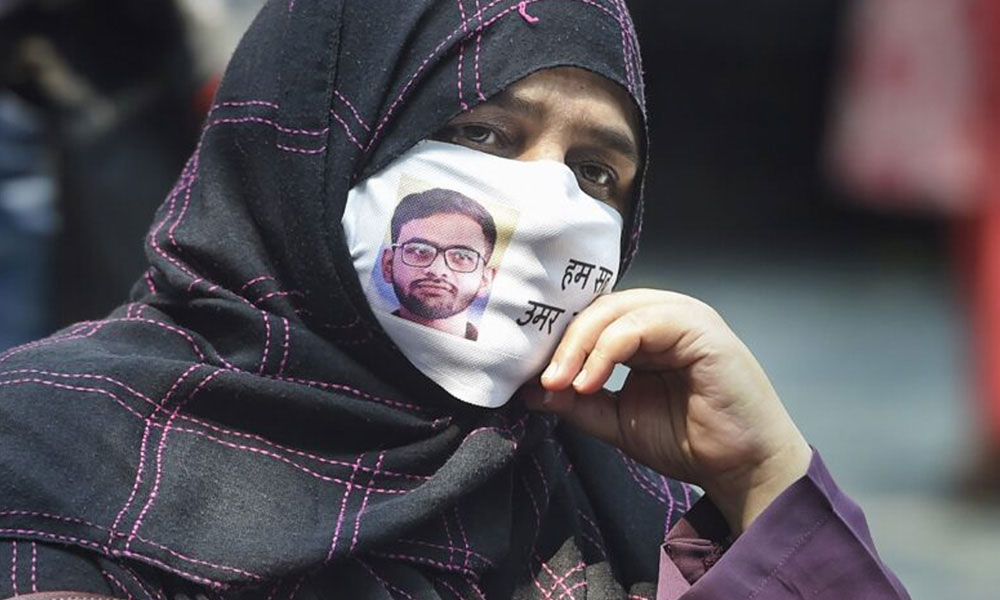 A series where we meet and speak to those mothers who have been fighting for their loved ones – sons and daughters who have experienced institutional discrimination, state repression, and injustice. Instead of romanticizing their fight, here, they speak for themselves – and their hopes and dreams, and what keeps them going.

Sabiha Khanum is the mother of Umar Khalid, jailed under UAPA & accused of masterminding the Delhi pogrom.

As we entered the house of Sabiha Khanum, nestled among the bylanes of Zakir Nagar, it was her warmth that greeted us first. Many years ago, in the middle of a hunger-strike by many student activists and organizations in JNU, I had seen her speak for the first time. It was 2016, a few months after her son, the student activist and then-PhD scholar, Umar Khalid, had been released from jail on the charge of sedition.

Once, as my family took me out on a long drive, I realized that my gaze extended as far as the horizon, as it often does on such roads. I suddenly remembered my son, and wondered how far he could see from within the prison bars – how long had it been since he had seen the open sky?

Their house sits on top of a small warehouse where abayas for the shop that she runs are stitched. Over the course of our conversation, she remembers how, in the midst of the anxieties that pervaded the arrest of Umar in 2016, the warehouse was robbed, despite the fact that they had been offered official security. The sense of humour at the absurdity of their situation never leaves her eyes or our conversation, marked as it is by fond memories of the childhoods of her children.

When I did wuzu (ablution) in the winters, blessed with hot water, I wondered how long it had been since he had access to hot water.

Now, she, her husband, and their five daughters are deprived of the company of Umar yet again. His friends too, have been running spirited campaigns for his release, including an offline protest in December 2020 where she and her 17-year old daughter, Sarah Fatima, were detained post sundown. She recounts how the police officer tried to note down her minor daughter’s age as 18 before an eagle-eyed relative of hers got it corrected. The stark difference between the arrest of 2016 and today is her lack of fear, she says, and the overwhelming sense of expectation that she had that her son would be arrested. In 2016, her daughters were immensely traumatized, but today, the family is in a stronger space, ready to take on the prospect of a long struggle.

Call it a mother’s instinct or what you will, but she recounts how she made her son speak to his sisters in the United States when he had been called for yet another round of interrogation late on a weekend. The repeated interrogations and the social media threats had built up an atmosphere where an arrest appeared inevitable, which came true on the 14th of September, 2020. That night, she knew something was up, and she was right. By night, they had been informed that he would be formally arrested.

A WEB OF CONSPIRACY
It has now been more than half a year that her son remains in jail. She sends him books and prays for him continuously. She recounts the entire ordeal of the case, and describes the Delhi pogrom case as a web or a story to which characters have been added as and when it fits the narrative. Umar, whose absence from Delhi while the pogrom raged has been repeatedly brought up by the defense, has been accused of criminal conspiracy in alliance with Khalid Saifi and Tahir Hussain, both of whom languish in jail as well. Now, the old sedition case has been opened up as well, and murmurs are on that he may be dragged into the ongoing Bhima Koregaon case as well. Citing concerns for his safety, he has been kept in a separate room and not in a general ward. He also recently tested positive for COVID-19 and recovered. (According to a article written from jail by Umar in May 2021, so has Sabiha Khanum herself, as well as Umar’s uncle.) There are many demands from civil society to decongest prisons, but the rights of political prisoners have not been adequately heard by the courts and the state yet.

I ask about the immense chilling of dissent and the overwhelming sentiment of fear that appears to have pervaded civil society since the continuous arrests in the Delhi Pogrom and Bhima Koregaon cases. Many students and activists have repeatedly been called for interrogations and then released, and murmurs about prospective arrests never really die down. There is far more self-censorship that there ever was.

But Sabiha Khanum is unfazed, bolstered by her faith. She recollects the fact that her son is named after Umar ibn Khattab RA and how she would frequently remind him about that, and make dua that he too be filled with the faith and strength that marked Umar RA’s character. Allah se umeed hai, she tells us. It is a refrain that runs throughout the conversation.

SOCIAL STIGMA AND FEAR
She is deeply aware of the immense support that has emerged from within the community for him and their family. But this not a universal experience. There have been many young students who were friends of her daughters who have now been warned by their respective families, often in very harsh terms, to never visit them again.

The media narrative that has poisoned the minds of people weighs on her mind. The image of a “conspirator” has made many people think that there is an element of truth to whatever is being presented, despite no supporting evidence. The term “mastermind” has stalked Umar since 2016, in addition to baseless links to Pakistan, and ideologies as diverse and poles apart as Islamism and Maoism being simultaneously applied to him.

Many people have advised her and her husband to move abroad, leaving everything behind. Her daughters too tell her to come live with them. Yet, they are bolstered by awareness that if they have not done anything wrong, then there is nothing to run from. Apna mulk hai, tells me, reminding me of the graffiti that sprung up across Delhi and Jamia in particular, during the anti-CAA protests that said “Hind mera (bhi) ghar hai.” The irony is not lost that Muslim students and their families have been vilified and called traitors for a protest which sought to re-affirm their citizenship and sense of belonging to the same nation.

PARTING ADVICE
She has one immensely significant piece of advice for both the youth and their parents. In a world which prioritizes materialism and accumulation of wealth, pushing kids into a rat race from which they never truly emerge, she asks them to widen their horizons. Maqsad buland rakhein, have an expansive and more holistic vision for your lives beyond your job and salary. In a world where both parents and children abandon other goals at the altar of this obsession, it is a refreshing change to hear someone say that there ought to be bigger dreams in life. Students who spend their 20s and even 30s engaged in research or social work are often seen as wasting their time in their prime ears, and have been accused of using “tax-payers’ money” to while away their time. Instead, as I exit her home, I leave with more hope than I did when I came.

Women who have fought for justice for their loved ones and themselves, in cases as diverse as institutional discrimination, lynching, UAPA, and so on, are often painted as mere victims. Sketches in newspapers paint them with tears rolling down their eyes, broken and defeated. Little do they know, these survivors would like to paint a different picture.