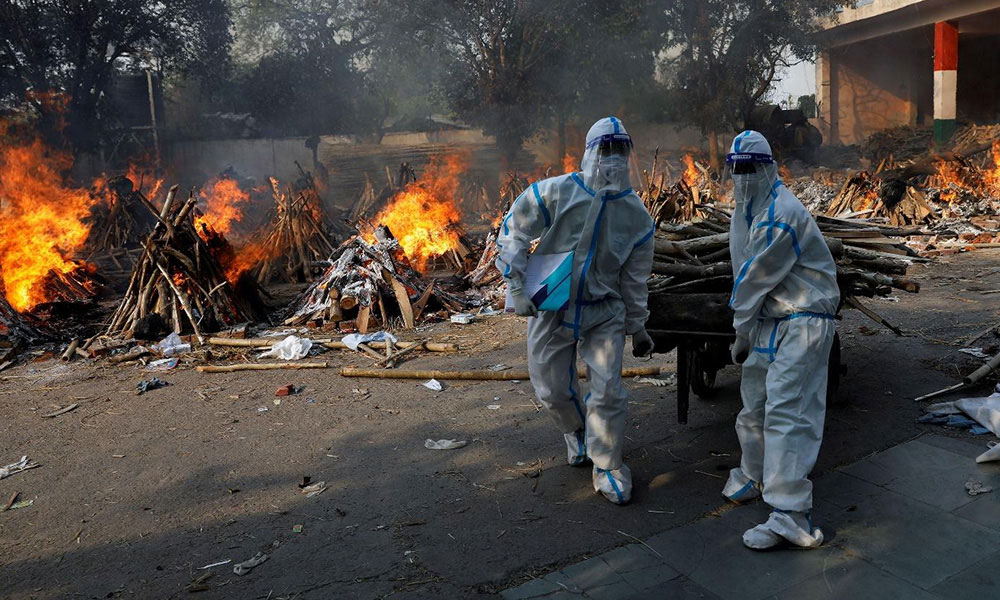 IMAGES of lifeless COVID-19 patients in a locked ICU, victims of a system that could not – or would not – arrange enough oxygen for its citizens; messages of children being orphaned due to both parents dying of the disease; elected legislators attempting to use the moment to practice old Islamophobic tricks…the list is endless and each moment adds to the toll – physical, mental, and societal.

As the second wave hit India after the lull of early 2021 – the quiet before the storm where all precaution was abandoned in favour of self-aggrandized chest-thumping about natural immunity and vaccine diplomacy – a frequent refrain that circulated was that the ‘healthcare system has collapsed.’ But as many public health activists highlighted, there was no overnight collapse, but a reveal of existing decay: the COVID-19 pandemic had only brought to light what had been ignored in favour of mass privatization of healthcare and an abject abandonment of its citizens by the erstwhile welfare state.

THE SLOW DEATH OF PUBLIC HEALTH
Public health, seen as an unfashionable product of a bygone era, had been erased from the minds of those who could afford private healthcare, premium insurance, or simply, to book a charter flight to the closest foreign destination away from the chaos of it all. Now, faced with the need for oxygen, beds, ICUs, vaccination and plasma, desperation has hit. The reality of Indian healthcare – a divided world, one with empty PHCs and another, with online portals for vaccinations – has come home to roost. The disease may be dangerous, even virulent. But it is the state-sponsored abdication of responsibility that has killed so many of our friends and loved ones, and many more unknown and uncounted for people who died gasping for breath. To say anything less is a travesty.

In reporting such sensitive events, language is important. And when people say that a person has ‘died’ of a lack of oxygen, they are missing the point, perhaps deliberately so. It is the similar kind of escapist language that is used in case of caste atrocities or sexual violence – where women ‘are’ raped or houses ‘burnt’ down, with no perpetrator in sight. Let us be as honest as the Allahabad High Court, which has noted that death due to lack of oxygen is a criminal act, one that is no less than genocide.

A MAN-MADE DISASTER
In March 2021, when COVID-19 struck for the first time, it could be argued that it had taken the country by storm. That claim too, was not entirely accurate, since there was some fair warning of what was to come when the virus began to spread through China and Europe. The discourse in favour of a badly organized lockdown, with no preamble or support system for many people who starved or were forced to walk all the way back to their homes to die, was bolstered by the elites in many metro cities clanging dishes and lighting diyas. With little contribution from the state, people managed to survive somehow. The many who died of hunger and starvation, or of the disease, were forgotten as the conversation began to return to helping the economy regrow and ‘living with the disease.’
However, with the second wave, things got much worse, almost unimaginably so. There was little in the way of building up the healthcare system in the brief and inexplicable lull that was provided in early 2021. The result is what is in front of us today – immense oxygen shortage, people scrambling for beds, and a flurry of court cases involving the Centre, state governments, the Supreme Court and the respective high courts, as states struggle to find oxygen supply for their patients. This utter chaos – of endless social media messages asking for help – paradoxically coexists with the fact that the Central Vista project is in full swing in Central Delhi, with an estimated total cost of Rs.13,450 crore. This is at a moment where people are struggling to get their relatives admitted due to lack of money even if they do magically find beds, and vaccines and RTPCR tests are being monetized for ‘super profits’ in private set ups.

The COVID management policy of India is entirely a man-made disaster. There are no two ways about it. Grief has overwhelmed most of India, as journalist Rana Ayyub wrote. From bodies lined up outside crematoriums and burial grounds, to the horrifying image of a daughter trying to give her ill father water as her family restrained her out of fear of the disease – the question of dignity seems to be a faint and distant dream, one that has rotted from within.

It is also an important point to note that while the second wave and its handling has received immense outrage, it should not make us forget the complete failures that underlined the first wave. If the second wave was marked by oxygen and bed shortage, even in the most urban of areas and well-off hospitals, the first wave too, was an unmitigated disaster for all – particularly for the most vulnerable, who could not afford the ‘lockdown’. Lockdowns, as we know, are only made possible by the efforts of those who cannot stay at home – essential workers, sanitation workers, medical staff, delivery personnel and so on. This further highlights the importance of understanding that the healthcare system has not collapsed now – but was this way for a vast majority of the country even before.

THE WAY AHEAD At this moment in time, it feels impossible, even ludicrous to think of a way ahead. It is like speaking from the eye of the storm. But perhaps, as all pandemics do, this too will come to an end. Despite the immensely slow and inaccessible vaccine program, which has completely deviated from the model of the earlier pulse polio vaccinations, maybe there will be a time that most Indians will either be immune or vaccinated, and the cycle will break. But what of those who could not survive this onslaught – one that could have been prevented and managed efficiently? Who will take responsibility for that, and for the trauma of those left behind? If that moment does come when we can move beyond the horror years of 2020 and 2021, it would not do to forget. The healthcare system has to be repaired, brick by brick, and if the absent consciences of those in power cannot be brought to life despite the immensity of this tragedy, then it is time to re-imagine a system and a mode of governance that is not built upon the comfort of a few at the cost of the majority. Disasters are often assumed to be equalizing in nature – earthquakes, floods, and pandemics, even. But it is not true. In our analysis of the pandemic, we must understand that while it certainly has a sweeping effect across all our lives, the inequities built into our system also ensure that it hits worse for some rather than others. Accountability has to be demanded keeping all these aspects in mind – rather than allowing it to be fully abdicated. The government has abandoned its citizens – it has not built up any confidence or tried to dispel myths around the vaccine, leading to mass vaccine scepticism, it has conducted long-drawn out elections and functions, and it is people who have been forced to organize their own oxygen, bed, testing, and ventilators. While it is admirable that people have come together in adversity and found ways out, it only highlights the abject failure of the state to do what was their job, and their only job in this crucial moment. A healthcare system, and a massive country like India cannot run on SOS calls and crowd-sourced funds. The image of a man sitting outside a hospital, having arranged his own oxygen cylinder, for want of a bed, is the best – or the most disturbing – representation of the state of affairs.