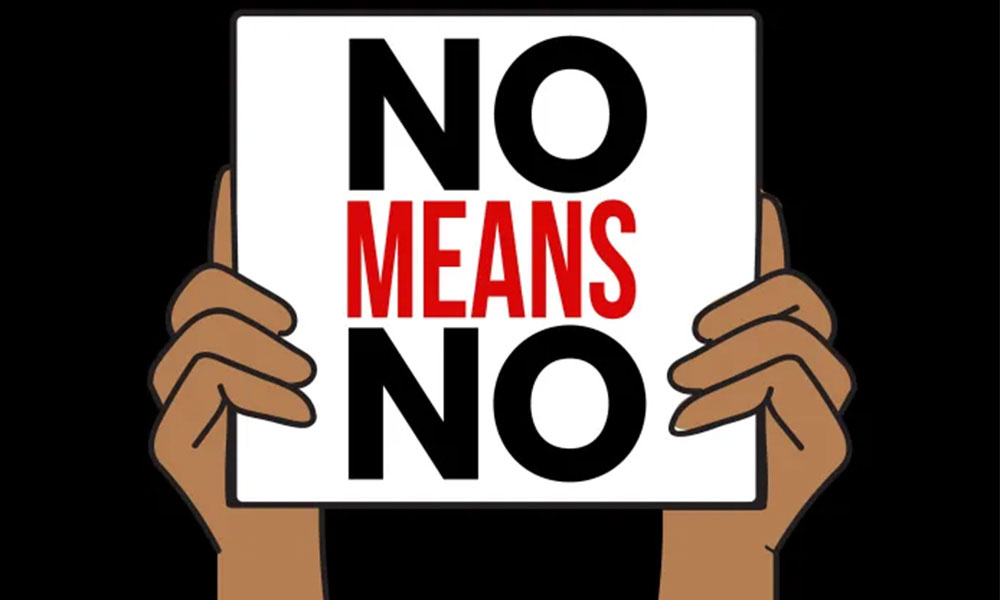 Artwork Credit: “No Means No” by Simlyn J/Feminism In India

Introduction
The ‘Nirbhaya’ Gangrape case shocked the consciousness of our society collectively to the extent that it resulted in the amendment of the criminal laws regarding rape in 2013. Many more rape cases in the subsequent years, including the Hathras case, has evoked similar concerns that the legal framework may be inadequate to address the extent of the problem.
Rape has been defined as “the ravishment of a woman without her consent, by force, fear or fraud” in the Indian legal system. The 1983 and 2013 amendments brought some significant changes to strengthen the law – first, the burden of proof of innocence is on the accused under section 114A of the Indian Evidence Act, 1872. Second, section 228A Indian Penal Code (hereinafter referred to as IPC) prohibits the disclosure of the identity of rape victims. Third, section 327 Criminal Procedure Code confers the right of an open court trial and prohibits the publication of trial proceedings in such cases without the prior approval of the court. Fourth, under section 376B IPC, sexual intercourse with one’s own wife without her consent under a decree of separation punishable with a minimum of 2 years and that can extend to 7 years. Criminal Law (Amendment) Act, 2013 introduced stricter punishments for rape. Section 376(1) mentions that any man who is found to be guilty of rape shall be imprisoned with a term of not less than ten years but which may extend to imprisonment for life and shall also be liable to a fine.
Rape under the IPC has 7 aspects as laid down under section 375 of IPC-

1. Action carried out against the will of the woman.
2. Without her consent.
3. The consent has been obtained by putting her or any person she is interested in fear of death or hurt.
4. With her consent, but she believes that it was her husband.
5. The consent was taken while she was intoxicated or of unsound mind.
6. With or without her consent, if she is under 18 years of age.
7. When she is unable to communicate the consent.

There are two exceptions- first, a medical procedure will not amount to rape. Second, sexual intercourse by a man with his own wife is not rape provided she should not be less than 15 years.

Marital Rape
Marital Rape is an offence in at least 100 countries but India is, unfortunately, one of the 36 countries where marital rape is still not criminalized. The JS Verma Committee which recommended the 2013 amendments also recommended criminalizing it. Despite that, rape laws continue to disregard that a married woman has the same right over her own body as an unmarried woman. However, as stated above, one of the exceptions to section 375 is that a man cannot have sexual intercourse with his wife if she is below 15 years. Whether such classification passes the test of reasonability is still to be decided by the Apex Court. However, it should be noted that sexual autonomy constitutes an inviolable core of the dignity of every individual.
It is of utmost necessity to increase the efficiency of the Criminal Justice System in rendering justice. Only then it would restore the confidence of the people in the system. The role of law enforcement agencies needs to be emphasized. Law is only an instrument through which crimes can be prevented, but this can only be possible with the active cooperation and support of the concerned agencies – police, public prosecutors, NGOs, judiciary, support help groups, etc. However, it is mainly the police which deals directly with the cases and the policing system in India is understaffed, overworked, ill-equipped, and certainly does not meet the demands or the responsibilities placed upon it.

The Legal Route
Rape is not merely a physical assault; it is often destructive of the whole personality of the victim. A murderer destroys the physical body of his victim, a rapist degrades the very soul of the helpless female – this was rightly said by the Supreme Court in State of Punjab v Gurmit Singh (1996). With every rape case that makes the headlines, it triggers an intense debate on sexual violence and the punishment that should be given to the offender. However, little has changed over the years. It is a matter of common knowledge that women in India are quite reluctant to disclose even to their families that they were victims of rape because of shame, apprehension of being misunderstood, and fear of bearing the consequences. This is apart from the mental trauma of the act, which also makes it challenging to pursue a legal route.

It is well-known that the legal system in India, and pursuing a case of such nature in it, can contribute to further trauma and distress, with its long winded procedures, humiliating examinations (such as the two-finger test, which has now been criminalised but is still practiced in parts), and threats from the accused. This contributes to the delay in lodging FIR. The unexpected delay in filing the FIR often proves fatal to the case and ultimately results in the miscarriage of justice.

Legal Sensitization
There should be efforts to sensitize criminal justice personnel working for rape victims to remove the element of shame and degradation experienced by the victims in the whole process. There is a need to rehabilitate victims to lessen their pain and suffering. Rape results in physical injury and psychological trauma. The victim experiences a decrease in self-esteem and self-confidence Not only does it break an individual’s self-esteem, it also is used in episodes of communal violence, pogroms and caste atrocities to humiliate a community. A victim needs professional assistance and guidance in resolving psychological problems. They should be encouraged to talk openly, which will allow them to seek comfort. A large part of society is unaware of the legal recourse and hence, the victims should be informed about their legal rights and legal representation. They should be assisted to make informed decisions.