March 2022
How Do Political Parties Understand Gender And Women?
Views : 576 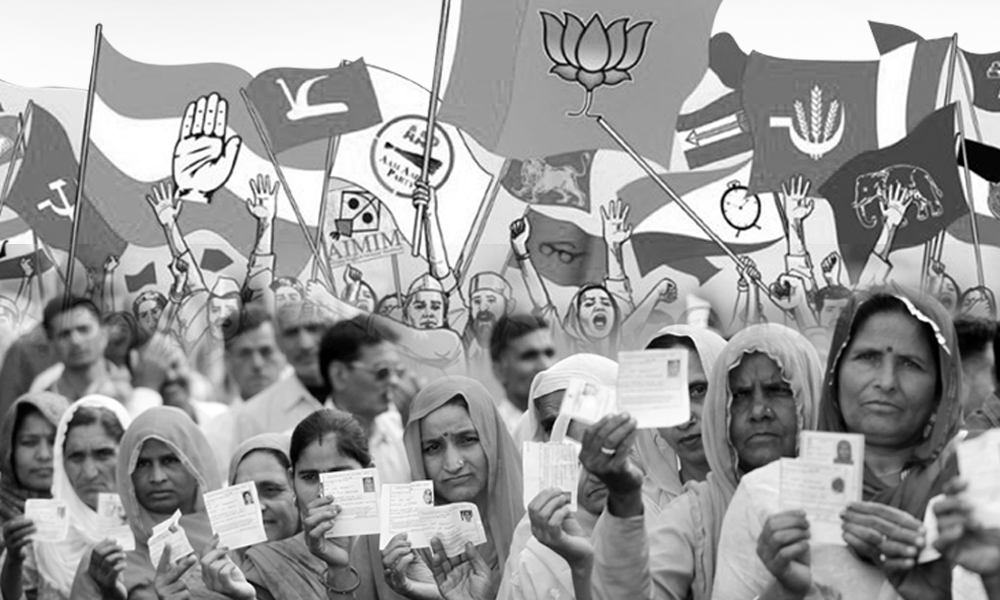 “The ballot is stronger than the bullet”
(Abraham Lincoln)

The term ‘political participation’ has a very broad meaning. One of the most important of these is the ‘Right to Vote’.

Women voters have the right to express their individual preferences, but women generally follow in the footsteps of others due to lack of political awareness. Through a political perspective, this study aims to contribute to a broader understanding of literature and gender inequality.

CONSTITUTIONAL RIGHTS OF WOMEN VOTERS
The Constitution of India establishes a parliamentary system of government, and guarantees its citizens the right to be elected, to have freedom of speech, to assemble and form associations, and to vote.

After India’s independence from the British, the Indian Constitution in 1950 formally granted suffrage to men and women. Before universal suffrage, the provincial legislatures had granted women the right to vote.

India has a multi-party system with 7 registered parties nationally. The three largest parties in India are the Indian National Congress (INC), the Bharatiya Janata Party (BJP), and the Communist Party of India (CPI).

Political parties have increased access to women voters as India’s party system has become more competitive. It also includes the formation of women’s wings in the largest parties.

Voters vote to elect the National Parliament as well as the state assemblies.

Although women have historically played a much smaller role than men in elections, their participation has increased in recent years. In India, women participate in voting more than men at the grassroots level for public offices and political parties. That’s why the eyes of political leaders are fixed on these women voters on the eve of state elections. So women and their issues come to the forefront in the promises of a political party.

Have leaders and political parties recognized the growing power of half the country’s population? That’s why facilities and plans for women are now at the top of their promises.
Political parties think that women’s vote is a stepping stone to the chair.

During the Assembly elections wave in five states of the country, UttarPradesh, Uttarakhand, Manipur, Goa and Punjab, the political parties made every effort to reach out to their voters, and in these efforts, their tendency has been more towards women voters.
Because there are more women voters in these states.
STATES TOTAL WOMEN VOTERS

Each party has its own way of winning the hearts of women voters. With some promises and some new schemes.

While the Aam Aadmi Party in Goa and Punjab has been trying to win the hearts of women with its election promises and on the other hand, the Congress has turned its attention to women in UP.

Delhi CM Kejriwal has promised to increase the home loan benefit for women from Rs 1,500 to Rs 2,500 per month when the government is formed in Goa, It has also been said to give Rs 1000 monthly to every woman above 18 years of age. The same promise has been made in Punjab. “What is the biggest women empowerment? If every one of our women has a thousand rupees in her pocket, what she can’t do? She will feel great freedom, she will feel independence, and she will feel empowerment.” Kejriwal said.

UP Congress General Secretary in-charge Priyanka Gandhi Vadra, while leading the election campaign in the state, has promised to give 40% Assembly tickets to women in this time’s elections and also conducted “Ladki hoon, ladki sakti hoon” campaign and also promised that they will give mobile phones to Intermediate pass girls and post-graduation daughters will be given scooties, if they come to power.
Akhilesh Yadav-led Samajwadi Party (SP) and Mayawati-led Bahujan Samaj Party (BSP) are also trying to attract women voters and are accusing the centre and BJP ruled states of not having created significant jobs as promised.

Samajwadi Party (SP) promised to give an annual pension of Rs 18,000 to all women, while Bahujan Samaj Party (BSP) promised to ensure 50% reservation in politics and government jobs for women. The BJP is not far behind either, PM Narendra Modi and Yogi Adityanath have repeatedly said that the Bharatiya Janata Party (BJP) government has offered both rights and protection to women.

STILL THEY ARE SUFFERING

According to records, more than half 15,828 of the 31,000 complaints received by the National Commission for Women in 2021 are from Uttar Pradesh.

The bulk of the complaints were related to domestic violence. In many of these cases, the accused was a close relative or acquaintance of the woman.
No political party has raised this important issue, and domestic violence is missing from the electoral discourse as well as providing safe spaces for women. Amrita Dubey, who was selling colorful earthen flower pots under the government’s ‘One District One Product’ scheme at a mela at the temple, said: “Currently women do not play a decisive role in politics, they have to find their way. When I was running around to establish my start-up, I had only met men, there were hardly any women. If more women gained employment, there would be more women on the streets. Right now, only women who have a family background in politics are able to engage in active politics.”
She added: “CM Yogi Adityanath has provided women with a feeling of security to some extent, along with employment opportunities. Police patrolling has increased on the roads.”

However she was quick to add that crimes against women continued in the state. “Much still needs to be done to ensure that girls feel safe. While voting, women remember who can help them feel safe and ensure their progress.”
Rajni Devi, a 40-year-old Congress candidate from Gorakhpur’s Khajani constituency, said women and girls could progress only if they were allowed to make their own decisions, both in politics and in their own lives.

And she also questioned why her character is judged but not the men who come to her shows. “If Narendra Modi can become the prime minister after selling tea, why cannot an orchestra dancer move forward in politics?” she asked. “As far as safety is concerned, women have never been safe, and if things continue as they are, we would never be safe.”
Issues of female voters and male voters are not much different such as: unemployment, educational issues, health care issues, safety and inflation. In general, the issue for all women voters is that many governments have made many promises but no one keeps them.

And the solutions of those problems are not possible, unless we raise our voice for our rights, and until we wake up ourselves, and if we do not do so then the same promises will be made on eve of elections and they will not be fulfilled. It is time to wake up, to know your rights, to bring political awareness. Our vote is a strong force and weapon for us and we have to understand that power, we have to use that weapon properly.