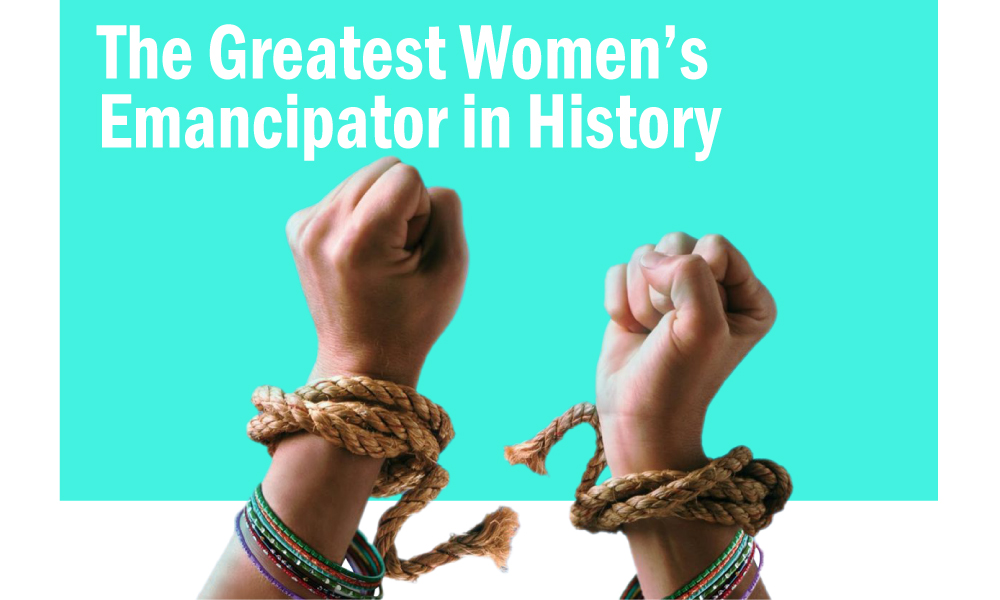 Life was so wretched and miserable for girls and women that the birth of a girl was considered as a shameful event. It was the worst kind of situation in history for them. From that despicable condition, the Prophet (SAW) made the society want for girls and feel proud being their parents. From being not even acknowledged as human beings, sold in the market cheaper than any commodity, and used as mere tools for men’s enjoyment women got equal status and honour as men in all walks of life. They started getting involved in socio-political engagements apart from being respected as a Queen at home. The emancipation, status, rights and dignity of life that the Prophet PBUH has ensured for women in his society was the best at that time across the communities and cultures and has been till this date. No better alternative has been proposed and practically implemented until now by any country, nation or ideology. And it is sure no one could as the Prophet has already taught the world and gave practical examples through himself and his followers in Madina as per the guidance of Allah the creator of both men and women, what it means to be women’s liberation in the right sense of the term.

What is the magic behind this great revolution?

There is nothing magical about it. The Prophet PBUH accepted women as women, acknowledged their worth and included them in all spheres of life. A woman need not have to dewomanize or strain herself beyond her feminine nature in order to be at par with men and lead an independent life with dignity and peace.

To begin with he taught the people that a girl child is a blessing not a curse. Hadith:

Jabir ibn Abdullah reported: The Messenger of Allah, peace and blessings be upon him, said, “Whoever has three daughters and he cares for them, he is merciful to them, and he clothes them, then Paradise is certainly required for him.” It was said, “O Messenger of Allah, what if he has only two?” The Prophet said, “Even two.” Some people thought that if they had said to him one, the Prophet would have said even one. Source: Musnad Ahmad

He made them realise that by treating women and girls in the best way a believer can attain the pass to paradise.

خيركم خيركم لأهله، وأنا خيركم لأهلي)) سنن الترمذي
The best of you is the best of you to his family, and I am the best of you to my family – Sunan Al-Tirmidhi
He advised his followers to marry women in order to be pious and get the nearness of Allah rather than keeping them away and going for monasticism. Marriage was taught as a contract in which women also had rights, like men. At a time when people talk about rapes in married life, the teachings of the Prophet on the minute details of bedroom manners should be taught to all. Even during sexual intercourse, the husband is instructed to consider and care for the sexual need and nature of his spouse. He said: “If anyone of you is engaged in sexual intercourse with your wife, do not be like birds. Be slow and have patience.”
He taught that mankind is indebted to women as a mother and she deserves to be honoured three times more than the father. He made them understand that they are indebted to mothers in such a way that they can never pay back their due, but do the maximum good they could which is humanly possible.

To enable women to lead a respectable life, education was made compulsory for girls too. So, if a parent has a girl child, he has to educate his daughter just as his sons and cannot make any differentiation in that. And once she attains maturity lifelong learning becomes compulsory for her. The husband has no right to stop her from learning. In those days the Prophet’s Masjid was the centre of learning and he encouraged women also to go there not only for prayer but also to listen to his teachings. There was no age bar for that. He would allot special times for women and used to patiently listen to their queries. Once he praised the Ansari women saying that they were not shy in learning. Women were encouraged to specialize in not just Theology but Medicine, Astronomy, Economics and so on.

Another step was to involve women in all social, political and economic engagements in society. The second Aqaba Treaty is a good example. In order to facilitate women to step out of their homes and contribute productively, he taught and gave practical examples to men from his own life that household chores and children’s upbringing are not the work of women alone. He proved himself to be the best example of sharing and caring at home. Believing women were equipped with proper dressing so that they will not invite any trouble and will be identified as women of honour and worth in society. Men are advised to lower their gaze in order not to disturb women even with their eyes. Spreading scandals on women, interfering and peeping into privacy were all prohibited by the Prophet which made women feel safe and comfortable. Every minute detail was taken care of to make the outside environment women-friendly as the home.

This gave women the courage to step out of their homes and play a constructive role in society just as men while enjoying all pleasures of family life. They developed the courage with the support of the Prophet PBUH to question injustice, stand for their rights and undergo any suffering for a good cause.

Apart from giving all basic rights that men have, women were given additional rights like the right not to work to spend for the family, the right to Mahar at the time of marriage and the right to protection in the form of Mahram as per requirement. This enabled peaceful and dignified life for women in all conditions. For example, if men are not instructed to earn for the women in the family and spend for their needs, there could be occasions when her life would be miserable. Suppose she is pregnant and if there is no obligation on the husband to spend on her needs, how difficult it would be for her! In the Islamic family environment as per the teachings of the Prophet PBUH, a woman can enjoy her journey of motherhood which would in turn be good for the baby too. Even if she has wealth or is earning, she has no obligation to spend for the family or even for her own basic needs. In case she does it is considered a sadaqah (Charity worthy of reward) from her side. Women are also exempted from certain duties which are compulsory for men. It is not obligatory for her to go to the masjid and perform the daily five times prayer there like men. She is given the freedom to either go to the masjid or pray from home. It doesn’t minimize her reward. If she goes, special care is taken to accommodate her. It was reported that the Prophet PBUH shortened the recitation of the Qur’an in the congregation when he heard babies crying. And later he explained that he did so considering the feelings of the mothers who were praying behind him. That shows how considerate and careful he was to make women feel comfortable.

So, if we analyze scientifically and without any bias, we can very well say that the Prophet PBUH emancipated women in all sense of the term which is not at par with any of the social systems developed by any culture or society. He raised the status of women from as low as the pits where newborn girls were buried alive to as high as the sky or even beyond that as he taught mankind that paradise lies under her feet.

“Mu’awiyah ibn Jahima reported: Jahima came to the Prophet, peace and blessings be upon him, and he said, “O Messenger of Allah, I intend to join the expedition and I seek your counsel.” The Prophet said, “Do you have a mother?” He said yes. The Prophet said, “Stay with her, for Paradise is beneath her feet.”