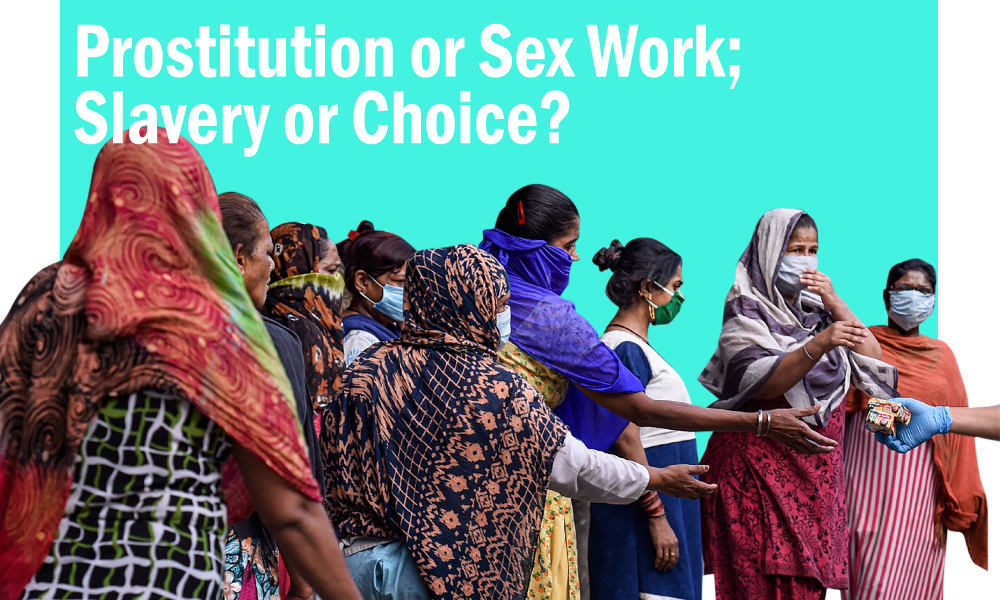 Category : WOMEN’S HUB ARTICLES
Author : Aura Staff
In Gangubai Kathiawadi, the Bollywood film that garnered much applause for the lead actress for a ‘gritty’ role, there is one scene that has gone viral. The eponymous Gangubai is the lead character, a depiction of a historical figure Gangubai Harjeevandas,

In Gangubai Kathiawadi, the Bollywood film that garnered much applause for the lead actress for a ‘gritty’ role, there is one scene that has gone viral. The eponymous Gangubai is the lead character, a depiction of a historical figure Gangubai Harjeevandas, better known as Gangubai Kathiawadi who was a brothel owner and a lobbyist for prostitutes’ rights as well as for the rights of orphans. “Journalist?” she asks a journalist by way of introduction. “Prostitute”, she introduces herself with a handshake and a confident smile. The scene has gone viral and even celebrated for the ‘bold’ and ‘unapologetic’ assertion of a prostitute, positing it as no different from any other profession, where other things are on sale – minds, labour, content, words – much like how bodies are on sale here. In the free choice theory abetted by the modern neoliberal market, the logic fits; even perfectly.

Recently, the Supreme Court’s remarks pointing towards possible future decriminalization of prostitution created some controversy. However, mainstream feminist groups welcomed it. It should be observed that prostitution, like some other hot-button issues such as the legalization of pornography or the debates over abortions and choice, have divided the feminist movements in India as well, with some NGOs focussing on the ‘rehabilitation’ of prostitutes and an exit from the industry, while others seeking rights within the existing framework and arguing that prostitution should be called sex work, as it is like any other kind of work. Notably, many Dalit feminists belonging to the Ambedkarite ideology have opposed this kind of characterization, arguing that those who call it a ‘choice’ fail to recognize that it is essentially a caste-based profession, with the worst off in society driven to this with little choice or ‘agency’ to exit it. Would the most elite in society defending prostitution ever choose to enter the profession themselves? The question remains hanging. Those who argue that ‘all work is work’ and ‘koi kaam chhota nahi hota’ (there is nothing like demeaning work’ also do not have answers to how jobs such as manual scavenging or prostitution, the latter of which involves a great deal of abuse, ill-health and sexual violence, can be ‘dignified’ or even called as ‘work’.

Yes, the journalist and the prostitute both function within a capitalist system that forces them to ‘sell’ certain things to pay the bills, but the journalist working in unhealthy or underpaid conditions might possibly find himself being able to transition to a better job or even a different industry altogether albeit with some struggle, but for prostitutes, such exit or transitional strategies are not visible. The stigma associated with such work in society also makes it difficult to find a different job, especially when most organizations seeking to rehabilitate them cannot truly offer them equitable alternatives, and the stronghold of the industry makes such interventions scarce.

Even in Gangubai, the brutality of violence is immense. The human body and mind deserve access to dignity and care. Every religious tradition in the world supports this. Men who are willing to pay for sex do not enter brothels with the intention to ‘care’ or offer love, but merely to fulfil their own sexual needs. There is a flawed argument that does the rounds that legalization of prostitution, or even the mere popularity of it, keeps sexual violence down since men take out their desire on these women and thus, keep themselves in check. But as Tara Kaushal in Why Men Rape explains, not only is this argument not supported by any data, it is a horribly demeaning one: that as long as ‘us’ women are safe, the women inside the brothels may take the entire brunt of it. Almost all the respondents in her book – convicted rapists – had a trio of activities they indulged in which had shaped their unhealthy and violent approach towards women: alcohol, pornography and prostitution. All the legalization of prostitution does is to legalize the existence of a class of women who deserve less respect, less dignity and less agency than the ‘rest’ of society. Just because this violence happens behind closed doors, in an area of the city seen as undesirable, we cannot close our eyes to it.

Yes, if we do push for the criminalization of prostitution, we must keep in mind the dignity of the women in question. They cannot be criminalized for acts they, in most cases, are sold off into the profession or forced into it due to circumstances; but the male customers of such acts must certainly be punished, and the widespread networks responsible for the continued practice must be attacked at the root.