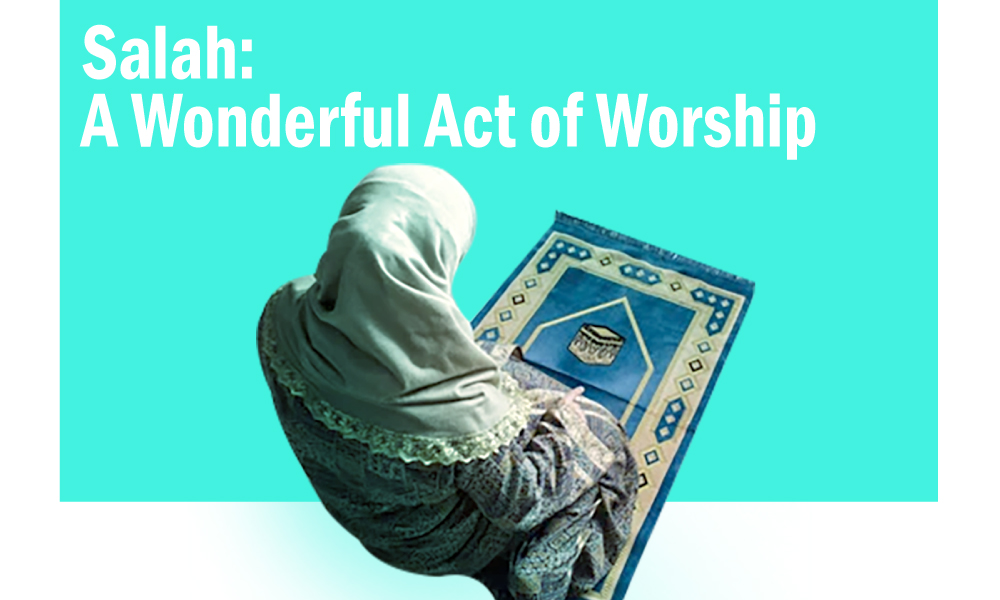 Category : ENLIGHTENED BY THE QU’RAN
Author : T.K. JAMEELA
Prophet Muhammad (pbuh) once narrated the story of a traveller who came to his mosque for Salah after a long journey. He had not taken bath or combed his hair while his body was covered by dust and dirt.

A person will not be accepted in a civilized society unless he/she purifies his body and mind from dirt. Those who do not purify their lives and do not remove impurities from their bodies and clothes will be kept away as people would not like to mingle with them.

Acts of worship in Islam bring people closer to their Creator and fellow human beings. Take the case of five-time prayers or Salah. Allah the Almighty has explained the two merits and objectives of Salah. First, it is to remember him. Allah says in the Qur’an:

“Verily I am Allah. There is no god beside Me. So serve Me and establish Prayers to remember Me.” 20:14

Second, Salah deters a person from indecency and wickedness. The remembrance of Allah is even a greater deterrent. (Qur’an 29:45)

Of course, the remembrance of God ensures efficiency and sincerity in a person’s work. God has warned us against the tragedy of keeping away from that remembrance.

Allah says in the Qur’an: “And whosoever turns away (blinds himself) from the remembrance of the Most Beneficent (Allah) We appoint for him a devil (Satan) to be his intimate companion.” (43:36)

“These satans hinder them from the Right Path, while they still think they are rightly guided.” 43:37

These two fundamental objectives of the Salah are supportive of one another as the remembrance of God prevents a person from engaging in wickedness.
Let’s discuss the conditions for the Salah to become lawful and acceptable.

First of all, a person doing Salah should have his body, clothes and praying place cleaned from dirt and impurities. A human being consists of not only his body but also his heart and mind. So he should purify his mind from impurities such as hatred, jealousy, arrogance, hypocrisy and doing things to show off and get admiration.

How can a person stand purified for Salah if he illegally obtained inheritance property or any other wealth or lived in a rented house without paying rent or wore a dress or took food using money that was amassed in an illegitimate way? A person cannot fulfil the conditions of Salah if he had been involved in such wrongful practices.

Prophet Muhammad (pbuh) once narrated the story of a traveller who came to his mosque for Salah after a long journey. He had not taken bath or combed his hair while his body was covered by dust and dirt.

The Prophet adds: He raises his hands and prays to Allah saying Ya Rabb…Ya Rabb. But his food is unlawful, his dress is illegitimate and he grew up surrounded by prohibited things. In this situation how his prayers will be answered? (Muslim)

At a time when many people run after psychologists and counselling centres we should enjoy the benefits of combined prayers that can solve many socio family problems to a great extent. When people do combined prayers they stand shoulder to shoulder and put their feet closer to one another. At the time of prostration people in the back rows put their heads near the feet of those in the front. A wealthy businessman may put his head during prostration near the feet of his peon.

Standing in rows for combined prayers itself offers good training. After wearing ihram dress for Hajj and making the intention for Salah the believers declare that Allah is the greatest to begin those acts of worship. When we declare Allah is the greatest we recognise that all others are smaller.

The first chapter in the Qur’an, Al Fatiha is recited 17 times during five-time prayers every day. It includes seeking refuge in Allah from Satan the accursed.
Here we have to remember that Satan was living in Jannah with Adam and Hawa. Why he was thrown out of Paradise after he was accursed.

Allah said to him when he refused to bow before Adam. “Then get out of it (Jannah), for indeed you are expelled.” Qur’an 15:34

Arrogance is not a good quality to be associated with a true believer in the Islamic faith. This verse also gives the message that arrogance is vice and a Satanic attribute.

In Al Fatiha, we next recite the verse “In the name of God Most Gracious, Most Merciful. After that, we recite All praise to God, the Lord of the Universe who showers his mercy not only on the believers and righteous people but also on non-believers and the deviated.

Al Fatiha also reminds us that God shows special mercy toward the believers. He is the master of the Day of Judgement. When we recite these great qualities of God we get the message that mercy is a fundamental virtue a believer should have in all walks of his life.

Even those who pray alone should say everything in the plural. “It’s you we worship and you we ask for help.” Guide us to the right path (there are millions of people around the world who do not know the right path).

This style of prayer reflects that we should have the qualities of magnanimity, love and mercifulness to consider that we are part and parcel of humanity and the entire universe.

The combined prayer also creates a sense of unity in the minds of believers.

The Salah begins with Allahu Akbar and the people who engage in that act of worship seek guidance, forgiveness and blessings with humility. In the end, they turn their face toward the right and left, conveying the greetings of peace to the angels on our shoulders making note of our deeds. Do you expect anything bad from a person who performs Salah in the best way? I am sure that they will be the righteous persons on the earth and they will not have any worries.

The Prophet (pbuh) has explained the greatness of Salah by giving a parable. He said a person who performs Salah five times after purifying his body and mind is like the one who takes bath in a river that flows in front of his house. He takes bath in that river five times a day. Do you think this person will have any dirt on his body? The Companions or Sahaba replied: Never. No dirt will stay on his body.

Salah is such a wonderful form of worship that can transform society to a much higher level by fostering remembrance of God and preventing people from immoral and evil deeds.