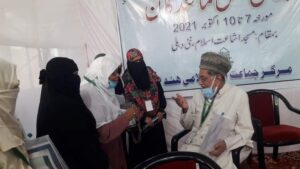 Renowned Islamic Scholar and former President of Jamaat-e-Islami Hind, Syed Jalaluddin Umari passed away on 26th August, 2022 in New Delhi. He was 88. He is survived by two sons and two daughters and his grandchildren. His wife expired last year.

Maulana Umari was the JIH President (Ameer) for three consecutive terms from 2007-2019. Maulana is globally recognized as a renowned Islamic scholar who rendered yeoman services towards the cause of Islam. His writings and books are considered authentic sources of Islamic information. Maulana Umari was the Vice President of the All India Muslim Personal Law Board as well as the Chairman of the Sharia Council, Jamaat-e-Islami Hind. He was Vice Chancellor of renowned Islamic University Jamiat-ul-Falah, Azamgarh and the Chief Patron of Siraj-ul-Uloom Women’s College, Aligarh. He was on the Board of many prestigious Islamic institutions. 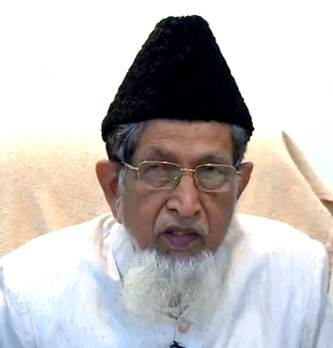 Maulana Umari was born in 1935 in a village called Puttagram in the North Arcot district, Tamil Nadu, India. He completed Alimiat and Fazilat (Masters in Islamic studies) from Jamia Darussalam, Omerabad, Tamil Nadu. He obtained his Baccalaureate (Munshi Fazil) in Persian from the University of Madras. He also received a B.A (English) degree from Aligarh Muslim University (AMU).

He was a noted Islamic scholar, educationist, researcher, orator, and author. He had ha penned over four dozen books in the Urdu language and contributed hundreds of research articles in various journals and magazines, on various topics including Islamic doctrines, Islamic jurisprudence, Dawah, Islamic social system, human rights, contemporary challenges and political issues. Many of his books addressed the issues and concerns of women. Later, a large number of his books were translated into various languages such as Arabic, English, Turkish, Hindi, Malayalam, Kannad, Telugu, Marathi, Gujarati, Bangla, and Tamil. Some of his well-known books include Tajjaliyat e Quran, Ma’roof-o-Munkar, Tajalliyat-e-Quran, Auraq-e-Seerat, Islam ki Dawat, Islam ka Shooraee Nizam, Islam mein Khidmat-e-Khalq ka Tasawwur, Infaq fi Sabilillah, Ghair Islami Riyasat Aur Musalman, Family System in the Holy Quran, Inviting to Islam, Islam and Human Rights, Islam and Service to Mankind, Islam and Unity of Mankind, Islam the Bastion of Human Rights, Islamic Solution in Human issues, Maintenance of the Divorcee – A Critical Analysis, Muslim Women and Economic Enterprises, Muslim Woman: Role and Responsibilities, Of the Weak and Oppressed and Islamic Shield, Relationship with Non-Muslims and their Rights, Rights of Muslim Women – A Critique of the Objections, Submission to God – Glory to Man, The Family System of Islam, Women and Islam, State of Our Community and Nation and Our Responsibilities, and Social Service in Islam.

His funeral prayer on 27th August 2022 was attended by men and women, and his final journey from Ishat ul Islam Masjid to the final resting place in the Shaheen Bagh graveyard had thousands of attendees. A condolence meeting was held in the same masjid on the 28th of August 2022.