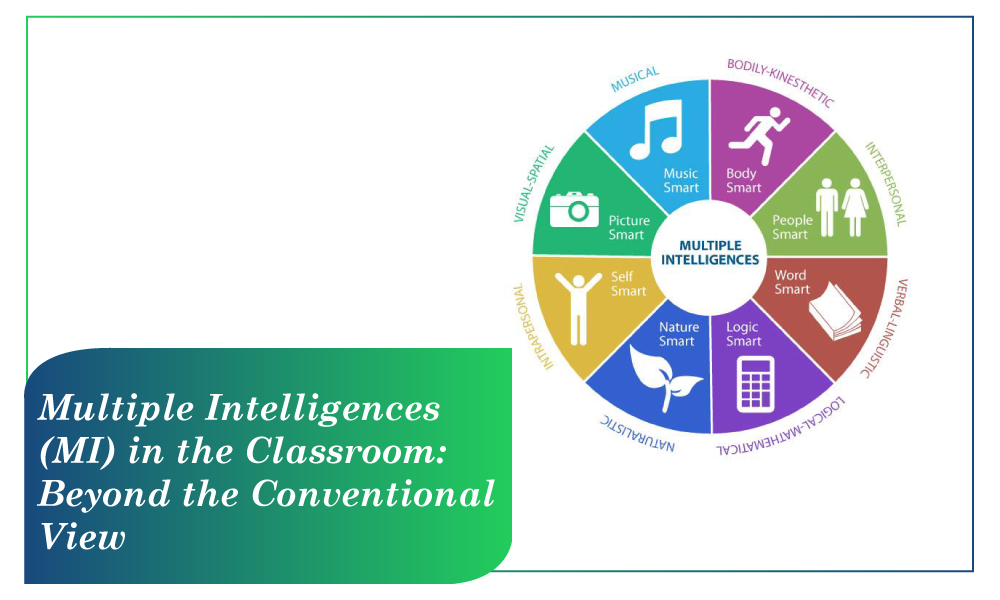 Gardner’s Theory of Multiple Intelligences (MI):
Today the education system focuses mostly on linguistic and logical-mathematical intelligence and ignores the other aspects of intelligence or capacities of a student. The evaluation system is also based on the individual or general capacity of a person and is measured by simple pen and paper tests or one-time assessments. However, Gardner suggested that the evaluation process must give equal attention to the individual so the other aspects of intelligence such as what is found among artists, architects, musicians, naturalists, designers, dancers, therapists, entrepreneurs etc can flourish.

Unfortunately, students gifted with other kinds of intelligence rather than just linguistic and logical-mathematical skills do not get proper reinforcement and hence are labelled as “poor learners” or “underachievers.” Also, their unique thinking and learning ability cannot be judged by simple traditional methods of assessments. Gardner focused on the other aspects of intelligence by proposing the Theory of Multiple Intelligences, henceforth, MI. It should be widely used and implemented in schools. MI theory describes human potential in children as well as in adults. Dr Gardner proposes eight different types of intelligence in humans. These intelligences are:

6) Interpersonal intelligence (“people smart”): Includes communication and interaction with others, maintaining social relationships, perceive the feelings, thoughts, motivations, behaviours, and lifestyles of others. Example: A talk to influence a group of people

7) Intrapersonal intelligence (“self-smart”): Reflection of personality, self-development, having an accurate picture of oneself (one’s strengths and limitations); working independently and the capacity for self-discipline, self-understanding, and self-esteem.

8) Naturalist intelligence (“nature smart”): It includes awareness and observation in the surrounding environment, expertise in flora and fauna, and sensitivity to other natural phenomena also such as cloud formations, mountains, rainfall etc.
All these types of intelligence are present in each individual to different extents. Although these are located in various parts of the brain and are interconnected to each other but can work independently. So the MI theory suggests that the teachers should be trained in this way so they can use a variety of teaching aids such as audio/video, picture composition, games, music, art activities, field trip, multimedia, information technology and computers in the classroom.

Methods which can be used to activate various aspects of intelligence in the classroomThe theory of MI suggests several other ways in which the subjects/matter might be presented and taught to facilitate effective learning in the classroom. MI theory allows the use of available teaching/learning tools beyond the conventional methods used in most schools, for example, lecture, textbooks, writing assignments etc. It also expands the prospect of teaching. Different classroom activities frequently activate and utilize more than one of the multiple intelligences, for example, storytelling is one method that can be used to stimulate almost all aspects of MI theory in the classroom. Other methods such as group discussion help in developing Verbal-Linguistic and Interpersonal communication, report writing activities – Intrapersonal as well as Verbal/Linguistic and so on.

1) StorytellingIn kindergarten, storytelling is one of the effective methods to stimulate various intelligence together. The eight intelligences of MI theory can be incorporated into students effectively through this simple method. It can be used in the following way:

Here, teachers don’t have to teach or learn in all eight ways, they only have to look for possibilities and then decide which seems to be the most effective teaching or learning tool. The theory of multiple intelligences is so fascinating because it expands the horizon of available teaching/learning tools beyond conventional methods. Multiple Intelligences Assessment The assessment of MI should reflect the variety of intelligence and learning methods in the classroom. However, traditional methods of assessments are biased in favour of students with strong linguistic and mathematical skills. These conventional methods of assessment cannot be used to evaluate students’ progress in all aspects. For example, students who are good at communication might not display the full range of knowledge in mathematics. Advocates of MI theory suggested adopting student progress in an inclusive and meaningful way i.e. to assess students with different methods of learning and their improvement. They propose evaluation as a regular part of classroom life rather than just a one-time assessment. Assessment should be a part of the learning process, not a stressful, unapproachable “event.” Challenges: While implementing MI theory in the classroom, teachers can face some challenges that need to be overcome; these are: 1. Difficult for teachers to target all types of intelligence together 2. The teacher needs to ensure the engagement of all the students. 3. A large number of students in the classroom. 4. Sometimes, addressing one type of intelligence may ignore others. 5. Inadequate classroom equipments. 6. Limited resources and undertrained teachers Conclusion: Human intelligence allows them to receive, decode, understand, apply and analyse the information which they receive through learning. The most remarkable feature of the MI theory is that it provides eight different possible pathways of learning. Teachers have to improve/manipulate their ability to address all students’ thinking as different as they may be. The MI theory focuses on the specific domain of intelligence rather than assessing intelligence as a single dominating ability. To sum up, the school curriculum should be designed in such a way that all students will find the best way receive knowledge, understand and connect their classroom to real-life experiences and apply it constructively.