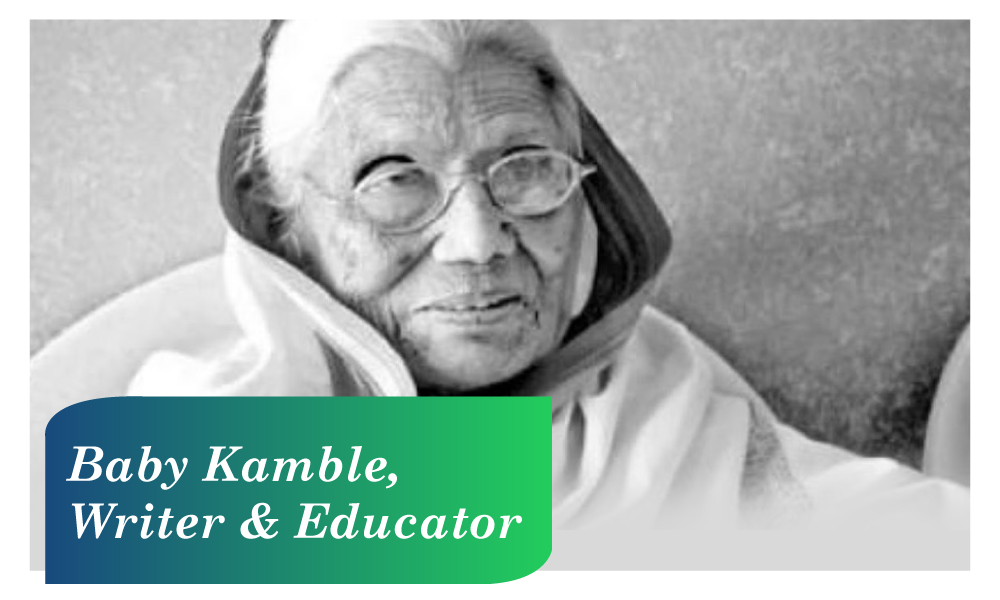 Category : Lessons from Great Personalities
Author : Aura Staff
A leader of the Ambedkarite movement in Maharashtra who passed away in 2012; author of ‘The Prisons We Broke’.
Born in 1929 in Veergaon, Pune, Baby Kamble belonged to the Mahar community, considered ‘untouchable’ in the caste hierarchy in India. Like many women of her generation who had seen the worst of society, deprived of basic healthcare and rights, Baby Kamble experienced the subjugation of caste and gender simultaneously.

She worked as part of the Ambedkarite movement, inspired by Dr Ambedkar and his call for liberation, and became an activist, an educator and a writer par excellence. Jina Amucha, the Marathi original of The Prisons We Broke, is probably the first autobiography by a Dalit woman not only in Marathi but in any Indian language. In the book, she recollects her experience with education, a passion stirred on by the insistence of Babasaheb Ambedkar that education was vital for the liberation of the oppressed castes:

All our leaders used to accompany us to school. Babasaheb’s words – “Education is your right, you must go to school” were stamped on our hearts. So, there was no question of our not going to school. But once we were in school, we were given a different treatment. We were made to sit in a corner on one side….

You have done so much work in your life; contributed to the social and educational development of people from many oppressed communities; you are running an ashramshala in Nimbure for them. You are trying to reduce their suffering…

Well, the school in Nimbure is a real achievement; there are two hundred and fifty students now in my school. That’s what Dr. Ambedkar used to tell us to do. Suffering has been a constant companion for us.”
Babaytai actively participated in the Mahila Mandal formed by Raja Malojiraje Nimbalkar and his wife Lakshmibai, which focused on Dalit women’s right to education and the broader pursuit of justice for the community. She also started an ashram for the educational needs of children in need. In an interview to Maya Pandit, she had said, when asked about the educational journey of Dalit communities and the effects of Ambedkarism:

“Were women different from men in this respect? And why did they believe in Baba so much?

It was only because of women that education became possible for us. Generally men would say, ‘Why put our son into school? As if he is going to become a teacher or a clerk! It’s better if he starts working as a labourer like me. At least he will earn a little money! You will ruin us with this madness! Sending children to school indeed!’ But women paid no heed to such talk.” (Round Table India, “It Is The Woman Who is the Real Doer”, 2012)