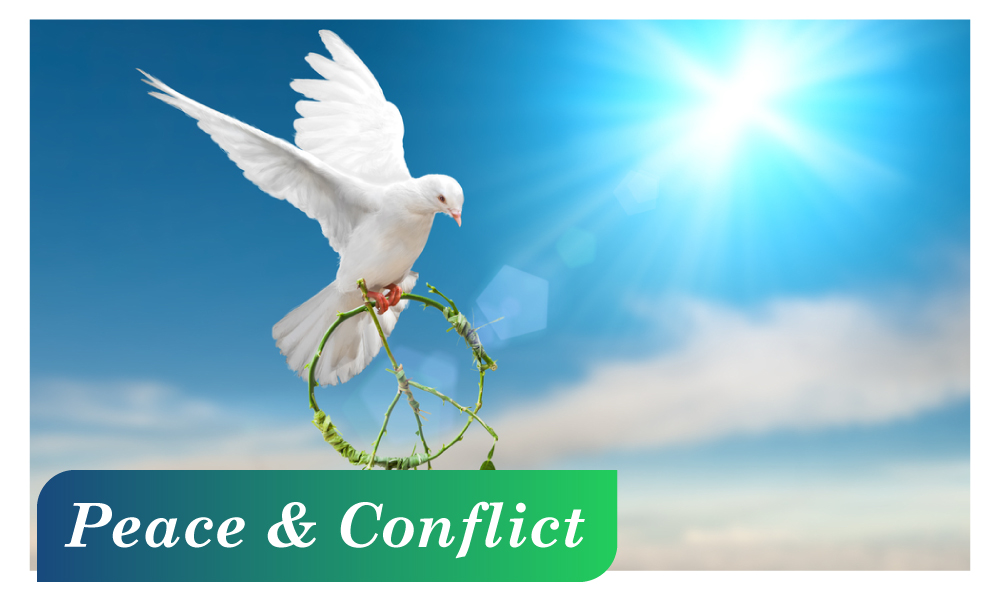 Category : THE WORLD OF POLITICS
Author : Arshad Shaikh
Nationalism is the lifeline of all wars and conflicts. Toxic nationalism does not allow any room to extend a hand of peace and build bridges of friendship for mutual trade and economic partnership.

The United Nations General Assembly established 21 September as the International Day of Peace in 1981. Twenty years later, the General Assembly again voted to commemorate the day as a period of non-violence and cease-fire. Why do we need to learn about peace and conflict? One reason is that peace and conflict have to power to make or destroy the world. They decide the course of history and the destiny of civilizations. Another reason to reflect on peace and conflict is the enormous cost humanity is paying today to maintain peace or plan for and engage in current and future expected and unexpected conflicts. If that economic cost of conflict is put to productive alternative use, it is sufficient to solve the challenges of global hunger, poverty, and disease. However, despite this glaring and self-evident truth, the amount of resources spent by nations on their defense expenditure keeps on increasing, conflicts keep occurring and lasting peace always appears elusive. Can the situation be remedied or is it a lost cause? Who is the villain in the piece? What can ordinary citizens do to make a difference?

Wars in the 21st century

The end of the Cold War was celebrated as the end of history. The West declared it as the victory of capitalist liberal democracy over other ideologies, especially communism. Political theorists predicted that the world would now see lasting global peace and prosperity. However, the 9/11 attacks and the subsequent war on terror, which many interpret as a euphemism for ‘war on Islam’, shattered that pipe dream and swept the world into new battles and conflicts. The wars in Syria, Iraq, Afghanistan, and Yemen destroyed these countries beyond repair. The Israeli aggression in Palestine and the saber rattling by North Korea keep their respective regions on tenterhooks. Conflicts raged in African nations like Burundi, South Sudan, Chad, Congo, Somalia Libya, Sierra Leone, and Ethiopia. The Indo-China and Indo-Pak border skirmishes continue to threaten world peace with fears of larger escalations between dangerously armed nuclear powers. The latest Russian invasion of Ukraine marks the beginning of Cold War II. It is posing an existential crisis for Europe. The inability of the United States to counter Russia marks its demise as a superpower and the end of its career as a global-policeman.

The cost of war

The Costs of War Project is a research project by the Watson Institute for International and Public Affairs at Brown University. It seeks to calculate the direct and indirect human and financial costs of wars in Iraq and Afghanistan and other counterterrorism efforts. In their most recent calculations, the Costs of War Project estimated that post-9/11 wars cost the United States more than $8 trillion and directly killed nearly a million people in Iraq, Afghanistan, Pakistan, Syria, and Yemen. A 2021 report from the project found that four times more U.S. veterans died by suicide than killed in combat. The Israeli illegal occupation of Palestine has claimed over 14,000 lives since 1987. According to a study published in the Lancet, around five million children in Africa under the age of five died because of armed conflict, over 20 years between 1995 and 2015. About three million were infants who were less than a year old. World War I cost us more than any previous war in history. Studies suggest that the amount could be between $125 to $186 billion in direct costs and $151 billion in indirect costs. This is just a financial estimate. The actual cost is too complex to calculate. In terms of the value of the dollar today, World War II cost $4 trillion just for the United States.

“The supreme art of war is to subdue the enemy without fighting.” – Sun Tzu, The Art of War

Détente, de-escalation, rapprochement, easing, breakthrough, thaw, moderation, and reconciliation are some of the words that define a state of moving away from war to peace. What are the benefits of peace? A petition on change.org by “The Global Peace Dividend Initiative” appeals to nation states to reduce “their military spending and use the immense resources liberated to address humanity’s most urgent threats: climate change, pandemics, and extreme poverty.” In an article in ‘Scientific American’, co-founders of the initiative, Carlo Rovelli and Matteo Smerlak estimate that “The world’s military expenditure has nearly doubled since 2000. It now amounts to about $2 trillion per year”. The duo proposed a “2 percent per year reduction in military spending, humanity would save over $1 trillion in just five years.” They estimate that “With that $1 trillion, at zero cost to states, humanity may finally be able to put up a serious fight against its real enemies. For comparison, the Global Fund to Fight AIDS, Tuberculosis and Malaria has saved an estimated 44 million lives with just 4 percent of this amount. Similarly, the (broken) “climate finance” pledge by rich countries to help developing nations mitigate the consequences of climate change amounts to just $100 billion per year; ending poverty globally might cost about the same amount. If countries agreed to reduce their military spending by 2 percent per year, these goals would all suddenly become within reach.”

Toxic nationalism and its antidote There are many causes attributed to the occurrence of wars and conflicts. Typically, the causes are political, economic, social, and even psychological. According to Marxist theory, capitalism and imperialism are the root causes of any conflict. It classifies wars into wars of imperialism, revolution, and national liberation. Nations feel insecure due to developments around them and feel that a pre-emptive attack is the best form of defense. Nationalism is the lifeline of all wars and conflicts. Toxic nationalism does not allow any room to extend a hand of peace and build bridges of friendship for mutual trade and economic partnership. There can be no reduction in defense expenditure, which keeps spiralling out of control to the detriment of much-needed funds for health, education, and other developmental programs. Reflecting on what men of repute have opined on nationalism can help one understand its redundancy. “Nationalism is an infantile disease. It is the measles of mankind” (Albert Einstein). “Patriotism is when the love of your own people comes first; nationalism, when hate for people other than your own comes first” (Charles de Gaulle). “Nationalism makes us weak because its eternal seeking of enemies, its disdain of others, its need to feel superior makes cooperation with other nations to collectively guarantee our freedom and security much more difficult” (Frans Timmermans). In a vibrant democracy, people are aware of their rights and role in society. They conscientiously monitor government policies, both domestic as well as foreign. Their first responsibility is to elect such representatives and political parties who do not believe in xenophobia, ethnic and racial superiority, and toxic nationalism. If the dominant thinking is swayed by ultra-nationalism and demagoguery, relishing war and conflict, they must appeal to sense and reason through dialogue, debate, and peaceful protests. Education of the masses is the key to creating an environment that cherishes peace and loathes conflict. The cause is worthy and the struggle long and arduous. But it’s worth the fight.

If the enemy is inclined towards peace, make peace with them… – Al Quran 8:61