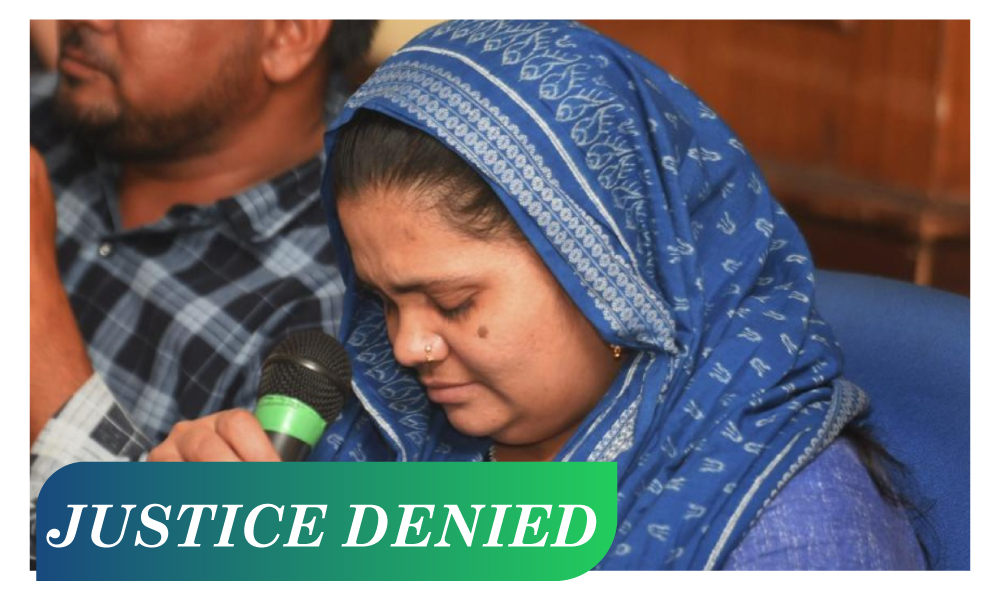 Category : MEDIA WATCH
Author : Sameena Afshan
“Two days ago, on August 15, 2022, the trauma of the past 20 years washed over me again when I heard that the 11 convicted men who devastated my family and my life, and took from me my three-year-old daughter, had walked free. I was bereft of words. I am still numb.
Today, I can say only this – how can justice for any woman end like this? I trusted the highest courts in our land. I trusted the system and I was learning slowly to live with my trauma. The release of these convicts has taken from me my peace and shaken my faith in justice. My sorrow and my wavering faith is not for myself alone but for every woman who is struggling for justice in courts.
“I have one request for every Indian. Can we change the mentality towards our women in everyday life. Pride of Nari Shakti will play a vital role in fulfilling the dreams of India. Respect for women is an important pillar for India’s growth. We need to support our Nari Shakti……” these words of PM Modi echoed at the Red Fort while he spoke at length about respecting women and empowering them during his address to the nation on the occasion of Independence Day. Ironically, a few hours later there came a severe blow on the idea of this Nari Shakti of India while the Gujarat Government set free all the 11 convicts of the high-profile Bilkis Bano gang rape case. The rapists and murderers who gang-raped Bilkis Bano and murdered 14 members of her family walked free after the Gujarat Government’s remission of their life sentences.

The uncanny dichotomy of a Prime Minister who fervently talks about women’s rights, coins the slogan of ‘Beti Bachao’ and poses to be the emancipator of women of a particular community is yet again blatantly exposed while his own party-led government of his home state released the convicts who had previously been found guilty of rape and murder.

How were the convicts released?


Each and every responsible citizen of the nation must be wondering about this miraculous law that could set the convicts of such gruesome acts free. In fact, the home ministry had permitted the release of certain prisoners on the occasion of the 76th Independence Day of India. Women and transgenders above the age of 50, male convicts above the age of 60, terminally ill convicts who will not pose a threat to the society etc. fall under this permission. Apparently, the Gujarat government’s remission policy of 2014 does not approve of the release of rapists, money launderers and murderers. However, in this case the government chose to use an expired, old remission policy of 1992 wherein these exemptions are not mentioned. This policy is outdated and is not even found in the state government’s official website. The Modi Government of Gujarat back in 2013 had put an end to the 1992 remission policy and a new policy was adopted in 2014. Nevertheless, the convicts walked free and were welcomed with garlands and sweets. This shows the evident ill intentions of the Government to manipulate laws and set the perpetrators free. What message does this remission of guilty give to the survivors of rape and communal violence? Does it not tell the rapists and murderers that they can walk scot-free after serving a term of 14 years? The message sent here is crystal clear that anyone who is convicted of a heinous crime can be above the law and can stand a chance of release from the prison if they are affiliated to a particular ideology and have the privilege of political supporters.

While the nation remains horrified of the convicts’ release the media’s inadequate response is appalling. The Times of India in Delhi had a short news on page 1 and continued it to page 17 where the two-column report mostly quoted the responses of the convicts. The Telegraph’s Kolkata edition had a tiny paragraph in a corner of the first page, while the Hindustan Times in Delhi reported the news in the bottom half of the first page and largely focused on the opposition responses. The Hindu carried a small news on page 1 and had an editorial titled ‘remission without reform’. The Delhi edition of the Indian express ran an editorial and reported the news on page 1 with responses from Bilkis Bano and her husband.

Most of the major political parties have adopted an alarming silence on the case. The BJP including its Minister for Women and Child Development have turned out to be completely mute. The Aam Aadmi party, that is claiming to be a competitor for the BJP in the upcoming assembly elections in Gujarat also chose to go silent on the issue. The Congress party however has condemned the release, and held a press conference to remind PM Modi of his ‘Rajya Dharma’ while the president of its Gujarat Pradesh Mahila Morcha has condemned Modi for his hollow claims about women empowerment in his Independence Day address. Rahul Gandhi continues his attack on the Gujarat Government for its horrid act of releasing the ruthless convicts. He also sharpened the attack on the prime minister and wrote on his social media handles saying “The entire country can see the difference between your words and deeds.”

Background of the Bilkis Bano case


By the end of February 2002 violence erupted in several places of Gujarat after the incident at Godhra station, in which the Sabarmathi Express was set on fire by some miscreants. Foreseeing the danger, Bilkis Bano and members of her family fled their village, Radhikpur in Dahod district of Gujarat, to escape the barbarous communal violence that ruthlessly targeted the Muslims in the village. The villagers feared a recurrence of the attack and looting that were carried out a few days ago during the occasion of Eid.
On March 3, 2002, the family reached a nearby village where they were attacked by a mob of 25-30 people armed with swords, sticks and sickles. The 11 convicted men that were recently released by the Gujarat Government were among these attackers.

Bilkis, her mother and three other women were raped and brutally assaulted. Of the group of 17 members that fled the village eight were killed, six were missing and three survived the attack. Bilkis’s three year old daughter Swaleha died while the attackers smashed her head on a rock. The mob then gang raped Bilkis Bano, who was visibly pregnant – five months, and then left her unclothed and bleeding thinking she was dead. She remained unconscious for about three hours. When she regained consciousness although the sight of devastation around her left her numb for a while, she gathered courage to move, take refuge with a tribal family nearby, clothed herself and proceeded to lodge a complaint in the Limkheda police station. In a Later stage while the CBI took up the case it reported that the Head Constable Somabhai Gori at this police station “supressed material facts and wrote a distorted and truncated version” of Bilkis Bano’s complaint.

Bilkis somehow managed to reach the Godhra relief camp from where she was taken to a hospital for medical examination. She then approached the National Human Rights Commission (NHRC). The NHRC and the Supreme Court took up the case and ordered an investigation by the CBI.

In the process of its investigation the CBI revealed horrifying facts of the cold-blooded murders that were carried out. The bureau concluded that there was foul play in the post mortem examination of the murdered in order to protect the accused. The CBI exhumed seven of those bodies and found that none of the seven bodies had skulls. According to the CBI the heads of the bodies were severed after the autopsy so that they go unidentified. It is an unfortunate fact that the murder and rape convicts who carried out this heinous, brutal and remorseless crime are set free by the lawmakers of the land.

The trial in the case then proceeded and was moved out from Gujarat to Maharashtra as Bilkis Bano received death threats. In January 2008, after seven years of continuous struggle, a special CBI court convicted the 11 men of rape, murder, unlawful assembly and some other charges under the sections of the Indian Penal Code. The conviction was later upheld by the Mumbai High Court.

There is an obvious outrage among the civil society against this release because the circumstances of the incident, the disgusting account of the massacre and gangrape, the smashing of the head of a three-year-old child and many more violations are so gruesome that the nation is shocked that these men are walking free. Bilkis Bano’s cousin who had delivered a baby just two days earlier was raped and murdered and her newborn was killed. Moreover, it is beyond horrifying that the men who tore the clothes of Bilkis Bano and gangraped her and her family members were her neighbours whom she saw everyday while growing up.

Bilkis is in danger once again. A strong fighter who fought courageously facing tremendous threats and hostilities is yet again traumatised. “The trauma of the past 20 years washed over me again,” she said. Here is the full statement of Bilkis Bano –

“Two days ago, on August 15, 2022, the trauma of the past 20 years washed over me again when I heard that the 11 convicted men who devastated my family and my life, and took from me my three-year-old daughter, had walked free. I was bereft of words. I am still numb.

Today, I can say only this – how can justice for any woman end like this? I trusted the highest courts in our land. I trusted the system and I was learning slowly to live with my trauma. The release of these convicts has taken from me my peace and shaken my faith in justice. My sorrow and my wavering faith is not for myself alone but for every woman who is struggling for justice in courts.

No one enquired about my safety and well-being, before taking such a big and unjust decision.

I appeal to the Gujarat government, please undo this harm. Give me back my right to live without fear and in peace. Please ensure that my family and I are kept safe.”

As the rapists walk free, we as a nation should hang our heads in shame. If this does not trouble the nation’s conscience then it should be evident that India will never be free of Nirbhayas. While some citizens of this nation are rejoicing the release of the culprits, garlanding them and touching their feet, the nation is definitely forced to believe that ‘Beti Bachao’ is not a slogan now, instead is a warning that the perpetrators are walking free so safeguarding your daughters certainly becomes your own responsibility.