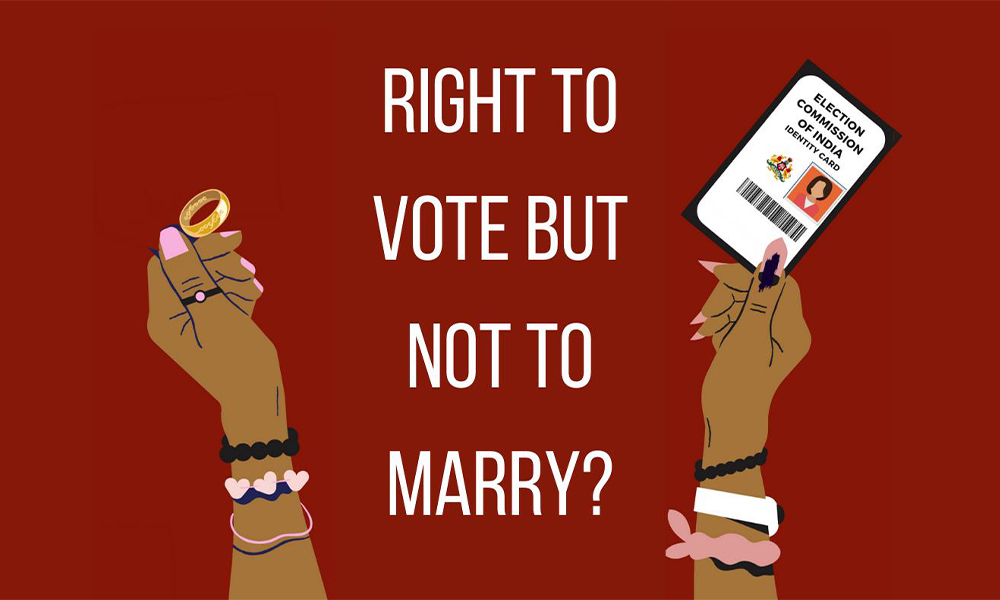 The recent announcement of the Union Cabinet to increase the legal age of marriage for women from 18 to 21 by amending The Prohibition of Child Marriage Act, 2006 (PCMA), bringing it at par with the marriageable age of men, has created an uproar among civil society, political organizations and women’s groups. With the government claiming that it has been proposed in the interests of women’s rights and gender justice (and not in the framework of population control), the move is riddled with contradictions and a distinct streak of paternalism that can not only do harm to the lives of millions of India’s young women, but also affect families and the society at large.

Recent studies have shown that a third of women married in the year 2018 were between the age group of 18-20. This means that even if one were to believe in the government’s supposedly altruistic intentions on helping women achieve higher levels of education and independence before committing to marriage, there is one major flaw in the plan – that only societal change, not top-down laws can truly make the lives of women in India easier and healthier. This law will only criminalize young couples seeking to get married, of which there is already a great deal of criminalization in the form of parents filing habeas corpus cases, kidnapping or rape cases when their offspring seek to get married without their approval.

Firstly, in a society ridden with caste- and class discrimination that leads to many otherwise happy and healthy relationships impossible, this new law will further add to the chaos. Instead of forcing young couples to exist outside the framework of marriage – one that guarantees security and rights of both parties as well as social cohesion a Social problems cannot be solved merely at the level of law, particularly when the law being framed is questionable in intention, motive, drafting & execution. The history of the women’s movement and its entanglement with the law, as many legal scholars such as Flavia Agnes have written about extensively, is testament to the fact that too often and too easily, both governments and movements rely purely on law instead of working on the rot within society. In fact, both fertility and the incidence of child marriage are steadily on the decline. Existing laws such as PCMA and The Protection of Children from Sexual Offenses Act, 2012 (POCSO) are adequate in their current framework, if only efficiently implemented.

Secondly, the government’s move is flawed because it is not based on correct data. The argument being given is that it is conclusively, early marriage is the cause behind low educational rates, maternal mortality, infant mortality and other markers. However, this is a mistaken argument. Indian women are victims of poverty, hunger, poor healthcare, gendered exclusion from inheritance and wealth, and other factors, none of which will be solved by this move. NFHS 5 (2020-21) data shows a link between the decrease of early marriage and secondary education and reduction in poverty, rather than any direct link with the law of marriageable age. With greater socio-economic growth, education and awareness, age of marriage has consistently been on the increase on its own. Conversely, school dropouts (which can lead to early marriage) is linked to sexual violence, unavailability of schools, lack of separate toilets, lack of menstrual hygiene, etc.

None of these issues have been tackled significantly at the root.

Organizations as diverse as All India Democratic Women’s Association, All India Progressive Women’s Association, Jamaat e Islami Hind, AIMIM, Indian Union Muslim League and others have spoken out against the move. Other mainstream parties such as the Congress and Trinamool have remained non-committal so far on the details of the bill. In fact, many of the opposing organizations have also demanded that the age of men to legally get married be brought down to 18. There is broad discontent against the move – which is seen as ill-thought out and with masked intentions of targeting Scheduled Tribes and minority communities. The age of 18 is widely seen as a bench-mark for adulthood in many aspects – the right to vote, elect representatives, sign contracts, work, have physical and sexual relationships (including live-in relationships). In this aspect, there is a clear discrepancy between this new age barrier and the existing ones, which treat people above the age of 18 as adults capable of making their own decisions.

In the Independence Day speech of the Prime Minister in August 2021, he spoke about how he was constantly worried about the health of women in the country and drew a link between malnutrition and marital age. But it is a fact that malnutrition begins much earlier, and is not necessarily linked to early marriage. It is also ironic that the same government at the centre has expressed its interest in malnutrition while in Karnataka, the BJP’s move to introduce eggs in the 7 most backward districts of the state has been met with wide backlash from religious outfits and seers of the many maths in the state.

Without seeing health, education, female agency, freedom and safety as a cohesive concept, random patchwork interventions are legally untenable and socially disruptive. The future of many under-21 married couples are at stake, and those who wish to get married at this age will be criminalized. Another concern that has emerged from women’s groups is that of the rights and entitlements of a married couple, particularly that of the woman. If a married woman aged 18-21 approaches the court for re-dressal for any marital violation, her husband may be free to argue that the marriage itself is void, leaving her in limbo.

The current age of 18 itself was introduced in 1978, an increase from 16, allegedly to provide for greater opportunities for women and to protect their rights. However, there NFHS 5 data shows that an alarming 23% incidence of child marriage even today, 40 years later. The same logic is being provided today, with no other work being done socially or educationally to enshrine the rights of women. This cycle will continue, as laws are dumped on top of older laws citing the same logic with little analysis of the past.

The most significant reason for the death of women during childbirth in India is post-partum haemorrhage, often from anaemia. This issue, as well as malnutrition and other factors have been a massive failure of the Indian healthcare system and the political establishment in the past many decades. They would do well to pay attention to solving such problems before enacting more laws ‘rescuing’ women from making marriages of their choice.

Conclusion A possible response to all these critiques can be that Indian women, due to many factors, are vulnerable and often not in a position of autonomous decision-making. It is undeniably true that very often, due to cultural and societal expectations, stereotypes and power dynamics, women’s choices are not in their own hands – when to marry, who to marry, when to have children, financial budgeting of the household, the right to work, so on and so forth. This is a societal problem that is the primary responsibility of the government to address hand-in-hand with civil society organizations, women’s movements, and other stakeholders. However, the sly pattern of events in the past many years shows that this reality of life in India has been only deviously used by the government to further take away the agency and decision-making of women from their hands and put it into the hands of government officials and state bodies. This forms the basis for anti-conversion bills, or bogey such as love jihad, and now, this proposal to increase of age of marriage. Instead of creating enabling environments that challenge the social hegemonies of Indian society which exclude women from all aspects of life, even their own, the government has chosen to merely use this fact as a pretext to create law upon inefficient law. Indian women do not wish to be objects of such fascist tendencies anymore; the backlash to this bill is testimony.