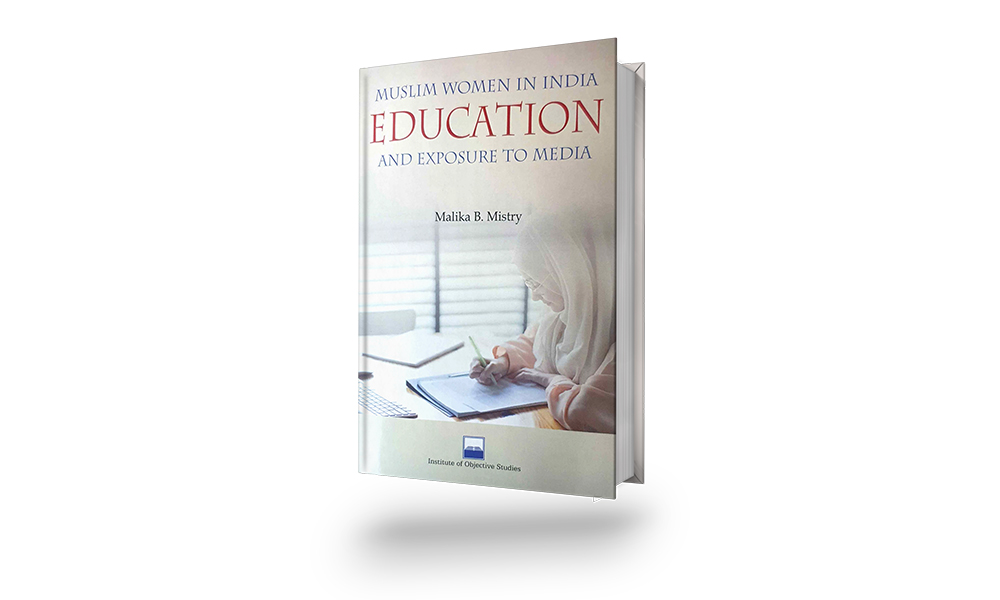 The book under review is a monumental exercise in mining data pertaining to education and media exposure of Muslims women from the four National Family and Health Survey (NFHS) held between 1992 and 2016. Pune based researcher Dr. Malika Mistry puts in perspective the educational backwardness of Muslims, especially their women, in terms of literacy, school attendance, general enrolment ratio (GER) and academic attainments in relation with women from other religious communities.

Several factors hinder the education of Muslims, especially the women. A general perception that women are better suited for role as a wife and mother discourages most families from enrolling the girl in schools and colleges. Distance of schools from homes is generally cited as a factors restricting enrolment of girls. Often the interpretation of the Quranic term Qiwama too reinforces patriarchal behavior. In olden days, most Quranic commentaries interpreted Qiwama as males being guardians of (and over) women. Recent commentators have digressed and would like the verse to be read as ‘Muslim men should stand up for the women’. Absence of schools and colleges in Muslim concentrated areas too prove to be a bane. Muslims also suffer from a high dropout rate, even higher than those among the Scheduled Castes and Tribes. Average annual dropout rate is said to be 9.1, highest among all communities. Any strategy to expedite the pace of literacy and enhancement of quality of education within the community would have to address these factors.

But it is the Muslims in the Hindi heartland who are the major laggards. As the study notes, four poorest states of Bihar, Uttar Pradesh, Jharkhand and Madhya Pradesh have 196 million or over half of the MPI (Multi-dimensional Poverty Index) poor of India. One has therefore to be mindful that educational backwardness is rampant among Muslims in states where also reside the most educationally backward Hindus. Haryana is another depressing story. Muslims in the state were found to be most excluded from the education mainstream, almost a 23% gap between its Muslim literacy rate and the state average in 2011. Muslim women in states like Kerala and Tamil Nadu are almost on par with those among Hindus and Christians across scales of literacy, attendance, enrolment, and academic attainments. Those in Karnataka, Rajasthan, Telangana, Andhra Pradesh too are catching up. Special schools set up by Telagana Government to promote quality education bore handsome results. These may serve as a few silver linings in the otherwise gloomy scenario.

The 2011 Census puts the rate of literacy among Muslims at 58% while 63% of Hindu population was literate. Christians had 74.3% literacy while the figure for the Sikhs stood at 67.5%. But the educational attainment is a more robust index of the quality of people. Only 2.8% of Muslims were found to be graduates. This was just half of what the Hindus were i.e., 6% while 25.6% among the Jains were graduates. The figure for the Christians was 8.8% while that for the Sikhs was 6.4%. Women fare still worse.But the good news is that, of late, Muslims women are doing better than their male counterparts in urban areas and the pace of enrolment for community as a whole, in higher education has gone up considerably.State intervention and initiatives from the NGOs within the Muslim community has led to encouraging results. In 90 minority-concentrated districts (MCDs) where the Prime Minister’s 15-point programme and MSDP were launched, the Muslim literacy rate rose from 52.4% in 2001 to 63.5% in 2011. However, the gap between the average Muslim literacy rate for the MCDs and that for all the other religions which had been 4.2 in 2001, increased to 4.5 in 2011. In the past five years, the enrolment of Muslim women increased by 46%, while the overall figures for all categories rose by 24%. The ratio of Muslim women to overall Muslims enrolment has been one point higher than the general ratio. As many as 49% of Muslims enrolled in higher education were women, while it was 48% for all the communities taken together.

As for media exposure, Muslim women fared the worst in matters of newspaper reading. Hindus though fared better than them but were far behind the Jain and Christian women. In 1998-99, 20.2% Hindu women and 17.2% Muslim women were reading newspapers and magazines. This percentage rose rather sluggishly to 26.4% and 22% respectively.

Mistry suggests Muslims to follow success models from Christian and Sikh communities who have achieved formidable success in elevating the educational standards of the respective communities. More residential schools for girls would address the concern on account of safety and commutation. The community would need to check dropout and take corrective measure to ensure retention of students for considerable number of years in schools.

The book serves as a timely reminder for a community waking up from deep slumber and taking up stock of its situation. It fulfills a void that has often proved a handicap in taking up proactive measures.