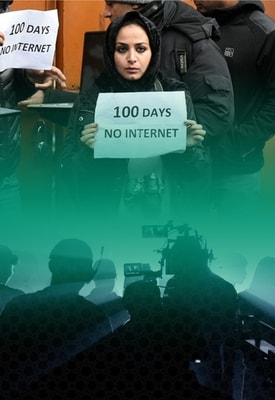 After a long period of 18 months, February 2021 brought some relief to the people of Jammu and Kashmir as the administration announced the restoration of 4G internet in the Valley. Kashmir faced a total internet blackout from August 5, 2019 when the Government of India revoked the special status of Jammu and Kashmir by abrogating Article 370 of the Indian constitution. The blackout, aimed at preventing a backlash against the government’s decision, was one of the longest internet shutdowns in the world. Several Kashmiri politicians were detained, thousands of activists arrested, and communication came to a complete standstill. Mobile phones and landlines stopped working and broadband connections were frozen.

Despite justifications issued by the government, the fact remains that the move curbed the lawful rights of the people of Kashmir in raising their voice and questioning the need for the abrogation. The horrors of isolation that the people faced during the period went unreported. The world was kept in the dark about the ground realities. The Valley has faced irreparable damage caused by the internet ban.

Kashmir bore the brunt in the fields of health, education and entrepreneurship too. COVID-19 added to people’s woes as internet services were badly needed in treating patients during the pandemic. While students all over the world attended virtual classes, children in Kashmir were deprived of this blessing. Despite being the hub of tourism, agriculture, textiles and handicrafts, the economy of the union territory suffered a severe blow. Online retail, digital marketing and home services were hit hard. Kashmir Chamber of Commerce and Industry says that the internet ban, followed by COVID-19 induced lockdown, have caused an economic loss of Rs 40,000 crore to the Valley, and that more than five lakh people are now unemployed.

Stifling the voices of dissent is not a new phenomenon. Whenever a totalitarian administration has taken over the reins of a state, it has resorted to brutally silencing the voices of the masses. Sophia Scholl and her brother Hans Scholl are well known examples who sacrificed their lives resisting the Nazi atrocities. Sophia, a student and an anti-Nazi political activist, was a member of a non-violent resistance group called the White Rose. She, along with her brother Hans, was caught distributing leaflets at the University of Munich, convicted for treason, and both were executed within four days by guillotine.

The last words of Hans were “Long Live Freedom”.

The world’s largest democracy is today witnessing a crackdown by the ruling government on voices of dissent. The ongoing farmers’ protest in India, that has now grabbed international headlines, is facing threats every day. Efforts are underway to silence them. They are being beaten up, trains commuting to the protest site are stopped, internet connections are curtailed, hooligans are let loose to attack their camps, and the supply of necessary commodities is restricted. At the protest site of Ghaziabad, a deep ditch is dug to prevent the flow of protestors. Nails are planted along the pathways. The scene at the protest site is just like a war zone with large barricades placed all over. A BBC report said that such barricades were seen in war-torn countries like Afghanistan or at the borders separating two countries.

Even the journalists who report from the protest site were targeted. A freelance journalist Mandeep Punia’s case is one such recent instance where a reporter was assaulted by the police. He had released a video wherein a group of people was seen pelting stones at the farmers’ camp at Singhu. The group was seen throwing petrol bombs and trying to set fire to their belongings while thousands of policemen watched as mute spectators. Punia was then picked up by the police, jailed and allegedly beaten up.

Troll armies on social media are working overtime. Cases are registered against those who speak against authorities. When American pop star Rihanna tweeted in support of the farmers’ protest, the ministry of external affairs came up with an official response to her tweet. With 100 million followers, Rihanna’s six-word tweet grabbed international attention. Some Bollywood celebrities and cricket stars who choose to be silent on any burning issue in the country, tweeted in support of the government’s stand terming the protest an internal matter of the country.

Subsequently, activist Disha Ravi was picked up from her residence in Bengaluru by the police for posting a toolkit in support of the farmers’ protest. The 21-year-old climate change activist has now been charged with sedition. Following her arrest, many other activists have gone silent on social media. People even started searching the religion of Disha on the internet and a few right-wing social media accounts falsely claimed that she was a Christian. Although some TV news channels came up with facts and debunked the claim, it is to be noted that this was another attempt to malign and intimidate a minority community as Disha’s religion has nothing to do with her case.

Nodeep Kaur, a 24-year-old Dalit labour rights activist from Punjab, is another victim of the ongoing crackdown on journalists and activists. She was arrested on January 12 while protesting for the rights of unpaid labourers. Nodeep was already under the scanner as she had been a part of the farmers’ protest to highlight the plight of landless and marginalised labourers. She is now facing a series of serious charges. Her sister Rajveer, an activist herself, claims that Nodeep was arrested only because she is a Dalit activist and the mainstream media chose to ignore her due to the same reason. She even alleged that Nodeep was assaulted in police custody. Both Nodeep Kaur and Disha Ravi have been granted bail in their respective cases.

India is a country where the right to dissent is guaranteed by law. But in recent years there is a concerted attempt to silence the voices. It may be recalled that Gauri Lankesh, a journalist who was vocal against the right wing forces, was gunned down and silenced forever. Voices of activists Narendra Dabolkar and Govind Pansare were silenced in the same manner. Santhosh Yadav and Malini Subramanyam are examples of freelance journalists from Chhattisgarh, who fearlessly reported on brutal human rights violations in Bastar being carried out under the pretext of cracking down on Naxals. Santhosh was jailed for a year in 2015 and allegedly tortured in custody before being granted bail by the Supreme Court. Malini’s house was targeted by a group of people claiming to be ‘patriots’, her neighbours were provoked against her, stones were pelted at her house, glasses were broken and eventually she and her family were forced to leave her home by eviction notice.

Targeting students and research scholars of JNU and Jamia Millia Islamia University has become a new norm in recent days. Several of them are arrested, allegedly tortured, and then released. Many are illegally detained and slapped with many charges ranging from criminal conspiracy to sedition. In a recent development, FIRs were filed in five states against Congress MP Shashi Tharoor, Siddharth Varadarajan of The Wire; Mrinal Pandey, editor of National Herald, Rajdeep Sardesai of India Today, Zafar Agha, editor of QaumiAwaaz, and three other journalists of Caravan magazine for allegedly posting misleading tweets on the ongoing farmers’ protest.
Our country is facing a dangerous situation wherein it seems like the rulers have waged a war against its own people. There is no end to the baseless allegations that are levelled to shut up critics. You are deemed to be anti-national if you are secular and a terrorist if you are anti-fascist. The world is watching as the freedom of expression is being curbed. Amnesty International has ceased to operate in India.

One can only hope that the attempts to silence the voices of dissent will go in vain and India will emerge stronger through the resilience of its fearless citizens who have made many sacrifices to uphold the harmonious and secular fabric of this great nation.