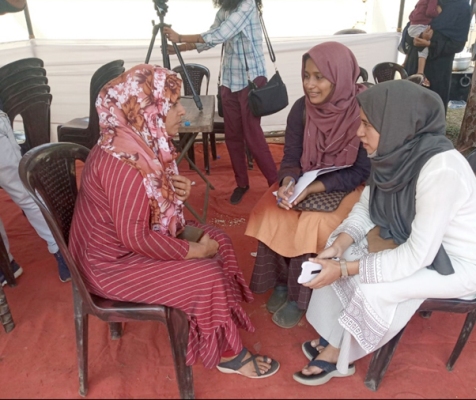 The following is an interview that was conducted in the month of February with Raihana Siddique, by Farha Shareef V and Nahla Mohammed KT.

Raihana’s husband, the journalist Siddeque Kappan has been behind bars since October 2020, accused of sedition and UAPA, merely for attempting to cover the Hathras rape and murder case.

1) Did you expect/notice anything unusual when he left to cover Hathras case?
No, I expected nothing contrary to his usual. I didn’t know he was going to Hathras. He was in Delhi those days. He had expressed his interest to visit Hathras someday, during our casual conversation over the phone, on the night before the incident. I came to know of the visit only after he set out. Even though he updates about such journeys in advance, as a journalist, there are also situations where he has to take instant decisions. The decision to meet the family of the Dalit girl who was gang-raped and murdered in Harthras was one of these immediate plans.

2) Does he have any previous experience of threats, blackmailing or police cases during his career as a journalist?
No. Not to my knowledge. We usually talk in detail about his reporting experiences at home. He was a man with a precise standpoint on everything that happens around us. He wanted his reports to be honest and based on facts. So far, there were no such bad experiences of police cases or any threats on him. The KUWJ (Kerala Union of Working Journalists) may know more about this.

3) What was the immediate reaction of people around you, following the arrest?
The news was quite a shock for everyone who heard it. He was so familiar in our locality that no one doubted him. All my neighbours are with me in this fight, and have been from the very beginning. None of them are estranged, nor has anyone alienated me.

4) How do you see the responses of journalists of Kerala on his arrest? Do you find their silence unfair, even when Siddeeque Kappan was the secretary of KUWJ Delhi unit?
Indian media can be broadly classified into three. First, those who stand with the truth despite opposition. Second, those who believe in propagandist fake news and spread the same consciously or unconsciously. Finally, those who keep silence in times of injustice. Those who are silent do not realise that they are not so far from Kappan’s destiny. The bitter truth is that their silence feeds for their own downfall.

5) Siddeque Kappan and others were arrested without evidence, allegedly instigating violence and defaming India after Hathras killing. Why is it that he got arrested just for doing his duty as a reporter?
He went to Hathras two days after Rahul Gandhi’s visit there. Perhaps his arrest was intended to divert the widespread media attention on Hathras case and Dalit atrocities across the country, and obscure ongoing protests against the Yogi Adityanath government. Moreover, he is a Malayali, a journalist, and a Muslim. It is evident that this government is so vigilant in silencing any voice against the injustice of state. Kappan is only a continuation, not the first or last.

6) A few days back, Supreme Court adjourned Kappan’s habeas corpus petition for six weeks based on UP Government’s request. Do you still have hope in Indian judiciary even after these continuous legal setbacks?
Isn’t it mandatory to believe in the judiciary in a democratic system?! It is my husband who is behind bars. The court delays every hearing. Still, I am forced to have hope. Judiciary is my last hope. What else I have to hold onto? We have urged the court for an interim bail of five days, to make an exception considering the last wish of ninety-year-old ailing mother to see her son. The Supreme Court will be considering the bail plea on 15th of this month. I’m sure my Ikka’s innocence will be proved soon.

Please do include him in your prayers. Insha Allah, the truth will prevail; the truth only.

(At the time of publishing, he had obtained five days interim bail, and had subsequently returned to jail.)

7) Is he contacting family these days? Has he shared anything significant during the phone calls from jail?
Last time SC has allowed a ten-minute video call with his mother. But given her health conditions, she was not even able to look into the screen or identify her son. She asks for him whenever she regains her consciousness. They were so close to each other that this is unbearable for everyone who knows them both. Now heis provided with a mobile recharge coupon of hundred rupees, and he calls us for about two or three minutes every day. He talks to our children, but not for long. These calls are under the officer’s watch too. But of course, it means a lot to me to hear his voice. At least I can be sure he is alive.

8) Are you getting the necessary support from the mainstream parties in recent Trivandrum Secretariat dharna and other legal proceedings?
Representatives from all the parties had joined us in the Secretariate dharna. Members of INC were the first to visit our house after the arrest. They organised a dharna at Malappuram too. I have tried to reach all the leaders, irrespective of their political affiliations. I have sent letters to Congress, CPIM and Muslim League MPs. My first and foremost concern is to get my husband out of jail. All of them were offering unconditional support. I tried even contacting BJP MP Suresh Gopi through the phone. He restricted himself, saying that it is the duty of the court to bring the truth to light, and Kappan will be spared if he is innocent. Currently, KUWJ is taking care of all the legal proceedings. Many independent collectives also help to keep the protest going. I need all the political parties by my side in this fight for our rights.

9) Have you ever felt that the stands and reactions of political parties in Kerala are selective?
Some people seem to be reluctant to come forward in demanding the release of my husband. Perhaps many are hesitant because of Uttar Pradesh Police’s statement about Kappan being the office secretary of PFI. But he is working as a journalist only and has no such official affiliations.

10) Were there any interventions from the Kerala Government towards his release, especially after the Secretariate dharna? Has anyone visited or contacted your family representing the government?
No. I could not meet the Chief Minister directly, but only his personal assistant. Neither the CM nor the government representatives have ever visited our house or contacted us over the phone to express solidarity. CPI MPs have intervened in the case from the beginning itself. Rakesh Singh MP, Elamararam Kareem MP and Binoy Vishwam MP have met central ministers and handed over letters insisting attention of centre. I am trying to meet the chief minister directly in all possible way to seek his urgent intervention for the release of my husband.

11) How do you observe the arrests of Siddique Kappan, Rauf Sharif and many more on fabricated cases as a Muslim in India, especially amidst this chronic Hindutva terrorism?
He has been charged with UAPA for his attempt to report a crime that sparked large-scale outrage in our country. They are arresting a person without any evidence and spreading lies about him. The freedom of speech and press in India today is so abysmal that the truth cannot be brought out quickly.

I have often seen Ikka interviewing many wives whose husbands have been unjustly imprisoned, who are in the same situation as mine now. But I never thought this would happen to me even in my nightmares.

The government is suppressing all voices of dissent inhumanly. I was proud and always be proud of him for being a man who stood for justice and performed his job without discriminating against people based on religion, caste, region, etc.

12) Your life may have changed a lot after his arrest. How do you see the long fight ahead? How do you think we should proceed?
Life ahead becomes a big question mark when I look into the eyes of his aged mother and our three little children. Sometimes I feel so tired and lonely without him. Soon I realise that crying after what happened will not do any good to him and that I have to do my best to bring out the truth. People around me inspire me not to get tired and keep up the fight.

In times of distress, our son comes and consoles me. “Why is Umma so upset? Isn’t it the sinful who should be afraid? You know our Uppa (Kappan) is innocent and has done nothing wrong. He will join us soon, Insha Allah. Allah is the best of judges. I am now looking forward to the next hearing. Include us in your sincere prayers. May truth prevail. May justice prevail. Ameen!